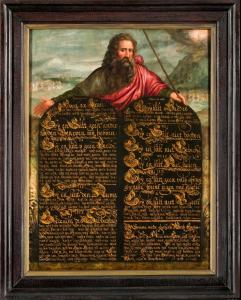 It is now time to consider the FIVE remaining commandments, which are about human duties towards other humans (the 10th “commandment” is psychological advice, and thus not a requirement about actions, like the other nine):

For the complete and precise wording(s), see Exodus 20:1–17 and  Deuteronomy 5:4–21.
The above summary is from the Wikipedia article “Ten Commandments“.

THE FIFTH COMMANDMENT AND JEHOVAH
Here is the fifth commandment as stated in the book of Exodus:
12 Honor your father and your mother, so that your days may be long in the land that the Lord your God is giving you.    Exodus 20:12  (New Revised Standard Version)
I have no problem with the idea that children ought to respect and obey their parents, at least if their parents aren’t criminals or drug addicts, and if their parents don’t physically or sexually or psychologically abuse them.  Parent’s generally know better than their children, especially young children, what is good and healthy and safe, and what is bad and unhealthy and unsafe.  So, it is (usually) better for children to respect and obey their parents, better for their own health, safety, and well-being.
However, it was extremely cruel and unjust for Jehovah to enforce this as a LAW using the most extreme form of punishment: the death penalty.  In the very next chapter, we see that Jehovah, once again, loves cruelty and bloodshed:
15 Whoever strikes father or mother shall be put to death.
17 Whoever curses father or mother shall be put to death.   Exodus 21:15 & 17  (New Revised Standard Version)
It shouldn’t be necessary (at this point) to argue against the pathetic rationalization of Jehovah’s cruelty that consists of the implausible claim that this is just “locker room” talk by Jehovah, and that the death penalty was not really intended to be used against those who violate the fifth commandment.
However, there is some further evidence that shows this lame excuse will not work here.  First, the initial four commandments concerning human duties towards God were ALL enforced by the threat of DEATH.  So, it is only reasonable to expect that the very first commandment concerning human duties towards other humans would be one of the most important of such duties, and thus would also, like all four previous commandments, be enforced by the threat of DEATH.
Second, the book of Leviticus re-iterates Jehovah’s call for the death penalty:
9 All who curse father or mother shall be put to death; having cursed father or mother, their blood is upon them.   Leviticus 20:9 (New Revised Standard Version)
Third, the book of Deuteronomy provides a specific procedure for implementing the death penalty in such cases:
18 If someone has a stubborn and rebellious son who will not obey his father and mother, who does not heed them when they discipline him,
19 then his father and his mother shall take hold of him and bring him out to the elders of his town at the gate of that place.
20 They shall say to the elders of his town, “This son of ours is stubborn and rebellious. He will not obey us. He is a glutton and a drunkard.”
21 Then all the men of the town shall stone him to death.  So you shall purge the evil from your midst; and all Israel will hear, and be afraid.  Deuteronomy 21:18-21 (New Revised Standard Version)
So, YES, Jehovah really did mean what he said.  Jehovah commanded that disobedient and disrespectful children be PUT TO DEATH.  The fifth commandment thus shows us that Jehovah was a cruel  and bloodthirsty tyrant.

THE SIXTH COMMANDMENT AND JEHOVAH