JEHOVAH: THE KING OF SEXISM
There is a videotape of Donald Trump saying this: 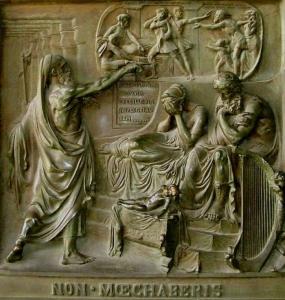 https://www.merriam-webster.com/dictionary/adultery
So, if the above traslations of Exodus 20:14 were CORRECT, the meaning of the seventh commandment would be the same as this “Prohibition of Adultery”:

PoA:  You shall not have voluntary sexual intercourse between two people, where one person is married and the other person is NOT his or her spouse.

You (men) shall not have sex with a woman who is the wife of another man.

Exodus 20:14 does NOT state or imply this prohibition:

You (women) shall not have sex with a man who is the husband of another woman.

Why the lack of a parallel sexual prohibition addressed to women? Jehovah considered the wife (or wives) of a man to be HIS PROPERTY.  But Jehovah did NOT consider the husband of a woman to be HER PROPERTY.  Husbands OWN their wives.  Wives do not OWN their husbands.  So, the seventh commandment basically means this:  Men, don’t mess with the valuable PROPERTY of another man, specifically don’t mess with his wife (or wives).
That this is the intended meaning of Exodus 20:14 can be inferred from a number of related Old Testament passages, including the statement of the tenth “commandment,” which is given just a few verses later in Exodus:
17 You shall not covet your neighbor’s house; you shall not covet your neighbor’s wife, or male or female slave, or ox, or donkey, or anything that belongs to your neighbor.   Exodus 20:17 (New Revised Standard Version)
Note that Jehovah says NOTHING about coveting your neighbor’s husband.  The tenth commandment is clearly addressed to MEN, and not to women.  “You (MEN) shall not covet your (MALE) neighbor’s house; you shall not covet your (MALE) neighbor’s wife…”  The seventh commandment is similarly addressed to MEN, and not to women.
In the tenth “commandment” a man’s wife appears in a list of items of PROPERTY, each item being something “that belongs to your (Male) neighbor”.  The list also appears to be ordered from most valuable to least valuable items of PROPERTY:

Note that a man’s wife was considered by Jehovah to be of less value than his house.
Another important bit of context that reveals the meaning of Exodus 20:14, is that ALL of the Ten Commandments were addressed to MEN, and not to women.  It is not just the tenth commandment which is addressed to men.  Jehovah gave these commandments to Moses who in turn was to give them to the MEN of Israel.  This can clearly be seen in the chapter in Exodus that immediately precedes the chapter with the Ten Commandments:
10 the Lord said to Moses: “Go to the people and consecrate them today and tomorrow. Have them wash their clothes
11 and prepare for the third day, because on the third day the Lord will come down upon Mount Sinai in the sight of all the people.
[…]
14 So Moses went down from the mountain to the people. He consecrated the people, and they washed their clothes.
15 And he said to the people, “Prepare for the third day; do not go near a woman.”
Exodus 19:10-15 (New Revised Standard Version)
Who are “the people” that Jehovah and Moses are talking about and talking to?  Since Moses tells “the people” that they should “not go near a woman”, it is clear that Moses takes “the people” to mean the MEN of Israel.  Moses was telling the MEN of Israel to NOT have sex with a woman, or to be around women at all, prior to his bringing the Ten Commandments to them from Jehovah.
Since Moses knew Jehovah better than anyone, it is safe to infer that when Jehovah was talking about “the people”, Jehovah meant the MEN of Israel, not the women, not the girls, and probably not the young boys either.  So, Jehovah gives the commandments to Moses and Moses addresses the commandments to the MEN of Israel, not to the women, not to the girls, and probably not to the young boys.
The intended audience of the Ten Commandments, spelled out in Chapter 19 of Exodus, thus provides further evidence that the correct interpretation of Exodus 20:14 is what I previously indicated:

You (men) shall not have sex with a woman who is the wife of another man.

There is still more strong evidence supporting this interpretation of Exodus 20:14, namely the passages that spell out the punishment for violating the seventh commandment:
22 If a man is caught lying with the wife of another man, both of them shall die, the man who lay with the woman as well as the woman. So you shall purge the evil from Israel.   Deuteronomy 22:22 (New Revised Standard Version)
10 If a man commits adultery with the wife of his neighbor, both the adulterer and the adulteress shall be put to death.   Leviticus 20:10 (New Revised Standard Version)
Once again, we see that Jehovah LOVES BLOODSHED and killing people.  So far, Jehovah has demanded that the punishment for the enforcement of seven of his commandments be DEATH.  This adds to the evidence that Jehovah is a cruel and bloodthirsty tyrant.  (If anyone who has read my previous posts suggests that this is merely “locker room” talk by Jehovah, and that Jehovah did not mean this literally, then I can only conclude that they have either forgotten to take their medications today, or that they are several fries short of a happy meal).
Note that these passages don’t say “If a woman is caught lying with the husband of another woman…”  There is no such verse in the Old Testament.  There is no such verse, because the seventh commandment was addressed to MEN, and was only concerned with protecting the PROPERTY of MEN, which includes their wives.
There is much more in the Old Testament showing that Jehovah is the KING of sexism and the KING of Male Chauvinist Piggery.  But I’m going to just summarize some of the other evidence, and draw this examination of the seventh commandment to a close:

Although Donald Trump might want to have sex with his own daughter,  I don’t think he would ever say (or believe) that it is OK for fathers to have sex with their own daughters.  Nor would Trump agree that daughters are the PROPERTY of their fathers.  Trump would find the idea of a father selling his daughter into slavery to be disgusting, and I think he would strongly object to his daughter being assigned the DEATH PENALTY for failing to scream for help while she was being raped.  Donald Trump would find such a law to be disgusting and repulsive and inhumane.
That is because, even though Trump is a sexist and a Male Chauvinist Pig, he doesn’t hold a candle to the sexist and Male Chauvinist Pig named Jehovah.  Jehovah is the KING of sexism, and the KING of Male Chauvinist Piggery, and Jehovah is a cruel and bloodthirsty tyrant.
The first seven of the NINE COMMANDMENTS plus the tenth “commandment” (which is really just some psychological advice to help people obey the previous actual commandments), reveal that Jehovah is precisely the sort of person who would command the MERCILESS SLAUGHTER of civilians, of elderly men and women, of mothers and fathers, of teenage girls and boys, of children, and of babies.  So, the “locker room” talk justification of Jehovah is clearly PURE BULLSHIT.
Because of Jehovah’s extreme sexism, he would have no serious problem with ordering the slaughter of elderly women, wives and mothers, teenage girls, young girls, and baby girls, and because of his LOVE of BLOODSHED, he could be OK with ordering the slaughter of elderly men, husbands and fathers, teenage boys, young boys, and baby boys too.