***RANT OFF***
I’m feeling much better now, thank you.  Haven’t been up on that particular soapbox for that long before.  Did feel pretty good to stomp on the that was just “locker room” talk by Jehovah  bullshit.
Now that I have that out of my system, it is time to return to my original task, which was to reply to a different attempt to justify Jehovah’s command to MERCILESSLY SLAUGHTER Canaanites, including civilians, including elderly women and men, husbands and wives, mothers and fathers, teenage boys and girls, young children, and babies.
In the view of at least one reader of my posts, Joshua’s MERCILESS SLAUGHTER of the Canaanites (and Jehovah’s command to perform this slaughter) was MORALLY JUSTIFIED because:

(a) they were given the chance to flee, and

(b) they belonged to a culture where some people did “some pretty disgusting things” like burning children to death, and

(c) the culture they belonged to engaged in “some pretty disgusting things” for a period of 400 years.

This is an important issue, because one reason for my claim that Jesus was a morally flawed person, is that Jesus was named after Joshua, the very famous warrior of Israel, and yet Jesus did NOT reject his own name and give himself a new name.
I see Jesus’ inaction on this matter as analogous to a German boy being named “Adolf” in the 1940s or 1950s and failing to change his name after learning about the bloodthirsty mass-murderer Adolf Hitler.  I grant that failing to disown the name “Adolf” is not a terrible sin, but it is clearly evidence that the person is a morally flawed person.   A person of complete moral integrity and strong moral sensitivity would be disgusted upon learning that they were named after the leader of the MERCILESS SLAUGHTER of millions (or tens of thousands) of civilians, including elderly men and women, husbands and wives, teenagers, children, and babies. 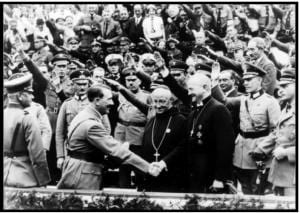 Hitler shaking hands with Catholic dignitaries in Germany in the 1930s

So, Jesus’ failure to disown his given name (i.e. “Joshua”) shows that Jesus was a morally flawed person, and thus NOT the divine Son of God. (“Yeshua” was the actual name of the carpenter from Galilee. “Jesus” is a poor English transliteration of the Greek name assigned by the Gospels to the carpenter from Galilee, but he and his family and his disciples did NOT speak Greek, so he was never in his lifetime called by the Greek name found in the Gospels, at least not by any friends or followers or family members.)

THE CANAANITES WERE “GIVEN THE CHANCE TO FLEE”
First of all, it is far from clear that the Canaanites were “given the chance to flee”.  But let’s set that objection aside for the moment.  Suppose that in every case Joshua and the army of Israel provided advanced notice to Canaanite towns and cities before they attempted to invade a town or city, and the inhabitants of each town or city were given a few days to leave and were WARNED that they would face “utter destruction” and “extermination” by Joshua and his army if they chose to remain in that town or city.
That would certainly be LESS EVIL than simply attacking Canaanite towns and cities without any warning, and MERCILESSLY SLAUGHTERING every person, including civilians, including elderly men and women, fathers and mothers, teenagers, children, and babies.  But the fact that some Canaanites failed to leave their town or city and leave their homes behind does not in any way JUSTIFY the MERCILESS SLAUGHTER of hundreds or thousands of civilians.
Such a justification would clearly be an example of BLAMING THE VICTIM.   Here is an example of this sort of pathetic attempt at justification of evil:

“I told her I would cut her throat if she screamed while I raped her, but then she had to go ahead and scream anyway!  So, I cut her throat.  Just like I said I would.  I gave her fair warning, and she ignored the warning, so she got what was coming to her.“

Sorry, that doesn’t even come close to being a MORAL JUSTIFICATION for cutting a woman’s throat.  Yes, it is LESS EVIL to have provided the warning, than to have simply cut the woman’s throat without any warning, but the action is still morally wrong, and it is still EVIL.  The blame cannot reasonably be shifted from the murderer to his victim.
Furthermore, this sort of lame justification is even LESS reasonable in Joshua’s case, because it is obvious that young children and babies have no choice to leave their home and their town.  That choice is made by their parents.  If their parents decide to stay, then the young children and babies will stay.
Teenagers might have a chance to flee independently of their parent’s choice to stay, but what are their chances of survival in the ancient world on their own, without food and money and without their parents to help them survive?  That would be an extremely difficult choice for a teenager to make, to leave their home and leave their town and leave their parents and leave their younger siblings behind them, and head out into a dangerous world all alone.
Elderly men and women might also have little or no choice here.  They might not be capable of walking at all, or of walking for the hours or days required to escape from the battles to come, and even if they were able to walk the long distance necessary to get to safety, they probably would not be able to earn a living in a new town or city, and would then remain homeless and would likely then starve to death.
In other words, many elderly people were dependent on their sons or daughters for their food, clothing, and shelter, and thus, like young children would have no real choice as to whether to stay or leave town.  The choice would rest with the son or daughter upon whom they were dependent.
If an elderly couple was living with one of their sons or daughters, and their son or daughter was married and had children, then if the elderly couple was unable to walk the long distance required to get to safety, then their son or daughter would have to choose between (a) fleeing with just their children and abandoning their parents to be MERCILESSLY SLAUGHTERED by Joshua and the soldiers of Israel, and (b) staying at home, staying in town, and attempting to protect their elderly parents (and their children) from being MERCILESSLY SLAUGHTERED by Joshua and his soldiers.  We could hardly blame them for choosing to stay to try to protect their own parents.  But that would mean that their children had little or no choice but to stay in town with their parents.

According to the biblical account of the Conquest of Canaan in the Book of Joshua, did Joshua consistently provide a warning to the cities and towns that he was preparing to attack, giving civilians at least a few days notice to leave that town or city or else face extermination at the hands of the army of Israel?

That is a question I will consider in Part 8 of this series of posts.
To Be Continued…