THE NINE COMMANDMENTS SHOW THAT JEHOVAH WAS A SELFISH JERK
Since we cannot harm God, or hurt God’s feelings no matter what we do, and since we can fairly easily physically harm other people and hurt the feelings of others or harm them emotionally and intellectually, it seems rather obvious that our duties towards other humans should be treated as of MUCH GREATER IMPORTANCE than our duties towards God.
So, the Ten Commandments, or rather the NINE (actual) COMMANDMENTS are ASS BACKWARDS. The four commandments concerning human duties to God should be at the end of the list, and the five commandments concerning human duties to other humans should be at the front of the list. This is the first bit of evidence (from the Commandments) that Jehovah is a SELFISH JERK.
He puts our duties to him at the front of the list, when he needs absolutely nothing from us, and he puts our duties to others at the end of the list when we have great power to harm others and to ruin their lives, and even (if we are truly evil) to “utterly destroy” them, to “exterminate” them.

A SECOND CLUE ABOUT JEHOVAH FROM THE FIRST FOUR COMMANDMENTS
Before I get into examining each specific commandment, there is a second general point to note about the commandments, specifically about the first four commandments, the ones that outline human duties to God:

(The above summary of the first four commandments is from the Wikipedia article “Ten Commandments“.)
It is important to understand that the NINE COMMANDMENTS, including these first four commandments, were NOT just friendly advice for how to live a good life; they were LAWS.  Jehovah, through Moses, provided LAWS for the nation of Israel, and like other law codes, there were punishments and penalties for disobeying these laws.
But virtually all nations have laws, rules that govern human behavior, and virtually all laws are enforced by means of punishments and penalties.  There are fines for violating parking rules, and fines for speeding or violating other traffic laws.  For more serious crimes, like kidnapping and armed robbery, we put people in prison, sometimes locking criminals away for several years, even decades.  For first-degree murder, and murder with aggravating factors, we have in the past put people to death, although the death penalty appears to be on its way out (finally) in the US.
The problem is that the first four commandments are RELIGIOUS LAWS.  They require people to worship a certain god, and to worship that god in a particular way.  We in the US, believe in FREEDOM OF RELIGION.  In the USA, you have the freedom to hand out any advice and guidelines you wish about our alleged duties towards a particular deity; that is your right.  But you do NOT have the freedom to compel other people to worship YOUR god, nor to worship YOUR god in YOUR WAY.  To compel other people to worship YOUR god, or to worship in YOUR WAY, would be to deny to others their FREEDOM OF RELIGION.
So, it is obnoxious for Jehovah to insist on making LAWS that compel people to worship him alone, and to worship him only in a particular manner.  Instituting LAWS that compel people to worship a particular god, and to worship that god in a particular way deprive those people of the FREEDOM OF RELIGION.
If God wants people to freely chose to worship him and to freely chose to worship him in the most appropriate way, then God must support FREEDOM OF RELIGION.  To compel people, by LAWS and by threats of penalties or punishments to believe in a particular god, and to worship a particular god, and to worship that god in a particular way, is to make humans into the slaves of that god.
Of course people will worship Jehovah (or at least pretend to) if they will be punished for not doing so.  Of course people will worship in a particular way if they will be punished for worshiping in some other way.  But this will NOT be something that they freely choose to do, and thus this forces people to be disingenuous, to have no serious intent in their religious observances, to be cynical and lack integrity in their religious beliefs and actions.
The separation of Church and State is not merely to protect the State from being controlled and corrupted by a religious leader or group, but also to protect religious leaders and groups from being controlled and corrupted by the State.  Using Laws and punishments to compel religious beliefs or observances corrupts religion.  Removing the FREEDOM OF RELIGION from a nation turns religion into a sham, cheapens religion, and turns religious believers into fakes and hypocrites.  True religion can only exist where there is the freedom to NOT be religious, or to be religious in a way that is NOT popular or generally approved.
So, because the first four commandments are presented not as good advice, but rather as LAWS for the nation of Israel, they were an attack on FREEDOM OF RELIGION by Jehovah, and thus an attack on the practice of religion with integrity and sincerity, and thus Jehovah unleashed a powerful force in support of religious hypocrisy and cynicism.
By making the first four commandments part of the foundational LAWS of the nation of Israel, Jehovah showed himself to be a tyrant, a dictator, a totalitarian, in relation to religion, and an enemy of true and sincere religious belief and practice. 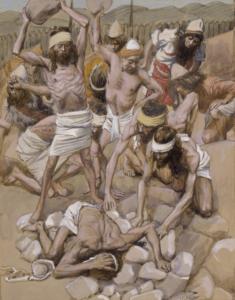 Someone might be tempted to try the old “Locker Room” talk justification of Jehovah:

“Jehovah was just being hyperbolic here.  He obviously wouldn’t be so cruel a tyrant as to have people killed for doing a bit of work on the Sabbath day.  He didn’t mean that literally.”

4 You shall not make for yourself an idol, whether in the form of anything that is in heaven above, or that is on the earth beneath, or that is in the water under the earth.
5 You shall not bow down to them or worship them; for I the Lord your God am a jealous God, punishing children for the iniquity of parents, to the third and the fourth generation of those who reject me…     Exodus 20:4-5  (New Revised Standard Version)

Notice that Jehovah threatens the children of the offenders, openly displaying his injustice and cruelty.  The children of the idol worshipers have done nothing wrong, but Jehovah is happy to punish them anyway.  What an evil JERK.
There are a couple of good reasons that come to mind for thinking that this RELIGIOUS LAW was also supposed to be enforced by the death penalty.   First, it is one of the first four commands, which are all religious duties, and it is sandwiched between those other religious duties, all of which were clearly intended to be enforced by the DEATH PENALTY.  So, it would seem out of place to be the very second commandment, yet for this commandment to be significantly less important  (to Jehovah) than the three other duties towards God.
Second, this commandment is very similar to the first commandment.  The worship of idols was associated with the worship of other gods.  Jehovah appears to be somewhat unique in demanding worship without the use of idols.  So, if somebody was worshiping idols, then they were at least playing with the idea of worshiping other gods, since that is how other gods were worshiped.
Although I am not aware of a direct demand of Jehovah to kill any and every Israelite who worships idols, there is a story which strongly implies this is what Jehovah would want to happen.   When Jehovah first gives Moses the Ten Commandments on two stone tablets, Moses carries the tablets down the mountain and finds out that many of the Israelites have been worshiping a golden calf (an idol).
Here is what Jehovah has to say about the worship of an idol by the Israelites:
7 The Lord said to Moses, “Go down at once! Your people, whom you brought up out of the land of Egypt, have acted perversely;
8 they have been quick to turn aside from the way that I commanded them; they have cast for themselves an image of a calf, and have worshiped it and sacrificed to it, and said, ‘These are your gods, O Israel, who brought you up out of the land of Egypt!’”
9 The Lord said to Moses, “I have seen this people, how stiff-necked they are.
10 Now let me alone, so that my wrath may burn hot against them and I may consume them;
So, here we have Israelites, Jehovah’s “chosen” people, worshiping an idol.  What is the first thing that Jehovah wants to do?  Jehovah wants to kill them all, the entire nation of Israel.  That means that Jehovah wanted to MERCILESSLY SLAUGHTER elderly men, elderly women, fathers, and mothers, teenage sons and daughters, young boys and girls, and babies by the thousands or hundreds of thousands.  (Sound familiar?)
Moses manages to talk Jehovah out of his initial plan to wipe out the entire people of Israel.  But part of how Moses get’s Jehovah to soften up, is by shedding some blood:
26 …Moses stood in the gate of the camp, and said, “Who is on the Lord’s side? Come to me!” And all the sons of Levi gathered around him.
27 He said to them, “Thus says the Lord, the God of Israel, ‘Put your sword on your side, each of you! Go back and forth from gate to gate throughout the camp, and each of you kill your brother, your friend, and your neighbor.’”
28 The sons of Levi did as Moses commanded, and about three thousand of the people fell on that day.
29 Moses said, “Today you have ordained yourselves for the service of the Lord, each one at the cost of a son or a brother, and so have brought a blessing on yourselves this day.”   Exodus 32:26-29 (New Revised Standard Version)
So, Jehovah was willing to wipe out every man, woman, and child in the nation of Israel because some of the adults worshiped an idol.  Moses attempted to satisfy Jehovah’s wrath by ordering the indiscriminate MERCILESS SLAUGHTER of thousands of his fellow Israelites.
Moses did not give Jehovah a full meal deal, but just a little snack of death and destruction.  Moses, who knew Jehovah better than anyone, was still unsure whether the MERCILESS SLAUGHTER of thousands of Israelites would be enough to calm Jehovah down, and to save the Israelites from “utter destruction” and “extermination”.
Can there be any serious doubt that Jehovah would be delighted by the use of the DEATH PENALTY on individual cases of idol worship?  Of course Jehovah wanted the DEATH PENALTY to be used to enforce the second commandment, just as he demanded death as the punishment for the other three commandments concerning human duties towards God.
We see that the relatively unimportant duties of man to God were wrongly given highest priority, by Jehovah making them the first four of the ten commandments.  Then we see Jehovah attacking freedom of religion by instituting these religious rules as LAWS that are to be enforced by punishments, and finally we have seen how Jehovah demands the most extreme penalty for disobedience to these RELIGIOUS LAWS.
Human duties to God, if God exists, should be considered the LEAST IMPORTANT of human duties, because we can do NOTHING to benefit God, and NOTHING to harm God, so making these relatively unimportant duties into RELIGIOUS LAWS and then enforcing them by means of the PENALTY OF DEATH shows that Jehovah is a cruel and bloodthirsty tyrant.