In the view of at least one reader of my posts, Joshua’s MERCILESS SLAUGHTER of thousands of adult men, adult women, teenage boys, teenage girls, elderly men and women, young children, and infants was MORALLY JUSTIFIED because:

(a) they were given the chance to flee, and

(b) they belonged to a culture where some people did “some pretty disgusting things” like burning children to death, and

(c) the culture they belonged to engaged in “some pretty disgusting things” for a period of 400 years.

This is an important issue, because one reason for my claim that Jesus was a morally flawed person, is that Jesus was named after Joshua, the very famous warrior of Israel, and yet Jesus did NOT reject his own name and give himself a new name.
In my view, Joshua’s leading the army of Israel to intentionally slaughter men, women, teenagers, boys, girls, and babies is on the same moral level with Hitler leading the nation of Germany to slaughter millions of Jewish men, women, teenagers, boys, and girls (I’m not sure if the Nazi’s killed Jewish babies, but seems like something they would do). 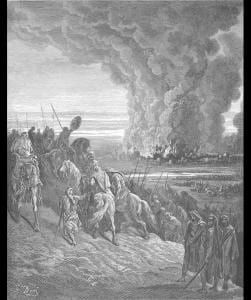