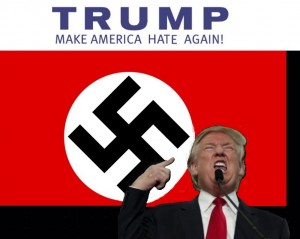 In previous weeks the top two Republican candidates for president were (1) an ignorant racist bigot (Trump), and (2) an ignorant religious nut case (Carson).  I used to think that about 1/3 of the Republican party was brain dead, because that is about the portion of Republicans who still believe Obama is a Muslim and that we found Weapons of Mass Destruction hidden away in Iraq.  But since about 1/2 of the Republican party favors either Trump or Carson, I’m now convinced that about half of the GOP is brain dead.
Just a few weeks ago three Republican presidential candidates (Cruz, Huckabee, and Jindal) appeared at a “Kill the Gays” conference to kiss the ass of the sociopathic Christian pastor  Kevin Swanson, in hopes of getting a few more bloodthirsty homicidal fascist Christians to vote for them.

But on Monday, Donald Trump, once again, took the lead in the race to crazy town.

==============================
Trump calls for ‘complete shutdown’ on Muslims entering US
By JILL COLVIN and BRUCE SMITH
Dec. 7, 2015 11:07 PM EST
MOUNT PLEASANT, S.C. (AP) — Donald Trump called Monday for a “total and complete shutdown of Muslims entering the United States,” an idea swiftly condemned by his rival GOP candidates for president and other Republicans.
The proposed ban would apply to immigrants and visitors alike, a sweeping prohibition affecting all adherents of Islam who want to come to the U.S. The idea faced an immediate challenge to its legality and feasibility from experts who could point to no formal exclusion of immigrants based on religion in America’s history.
================================
I, of course, agree with the condemnation of Trump’s bigotry by the Democratic presidential candidates:
From the Democratic presidential campaign, Bernie Sanders said, “Trump and others want us to hate all Muslims,” and Hillary Clinton called the proposal “reprehensible, prejudiced and divisive.”
But apparently some Republicans aren’t yet brain dead, and also condemned the creeping fascism of Mr. Trump:

“Donald Trump is unhinged,” Jeb Bush said via Twitter. “His ‘policy’ proposals are not serious.”
John Kasich slammed Trump’s “outrageous divisiveness.”
But all of these critics are competing with Trump, so their objections may be politically convenient.  Nevertheless, there are others, including Republicans who are speaking up against Trump’s idiocy:
Trump’s plan also drew criticism from the heads of the Republican Party in Iowa, New Hampshire and South Carolina, the first three states to vote in next year’s presidential primaries.
New Hampshire GOP’s chairwoman Jennifer Horn said the idea is “un-Republican. It is unconstitutional. And it is un-American,” while South Carolina chairman Matt Moore said on Twitter, “As a conservative who truly cares about religious liberty, Donald Trump’s bad idea and rhetoric send a shiver down my spine.”
==================================
The new Speaker of the House, Paul Ryan, made one of the best comments:
“This is not conservatism,” said Mr. Ryan, the House speaker and the Republican vice-presidential nominee in 2012. “What was proposed yesterday is not what this party stands for and, more importantly, it’s not what this country stands for.”
“Some of our best and biggest allies in this struggle and fight against radical Islamic terror are Muslims, the vast, vast, vast majority of whom are people who believe in pluralism, freedom, democracy, individual rights,” Mr. Ryan said.
Even Dick Cheney could not stomach Trump’s bigotry:
Former Vice President Dick Cheney, in a radio interview, said late Monday that “this whole notion that somehow we need to say ‘no more Muslims’ and just ban a whole religion goes against everything we stand for and believe in.”
(I’m now going to take a shower, having just agreed to something uttered by Dick Cheney, for the first time in my life.)

===============================
It is not just liberal-commie-pinkos like me who see Trump’s creeping fascism.  Some conservatives are starting to use the “F” word to describe Trump:
“Trump is a fascist. And that’s not a term I use loosely or often. But he’s earned it,” tweeted Max Boot, a conservative fellow at the Council on Foreign Relations who is advising Marco Rubio.
“Forced federal registration of US citizens, based on religious identity, is fascism. Period. Nothing else to call it,” Jeb Bush national security adviser John Noonan wrote on Twitter.
Conservative Iowa radio host Steve Deace, who has endorsed Ted Cruz, also used the “F” word last week: “If Obama proposed the same religion registry as Trump every conservative in the country would call it what it is — creeping fascism.”
Note that these comments were made BEFORE Trump vomited up his latest bit of anti-Muslim bigotry.
==========================
Before he exited the race for the Republican nomination for president, Bobby Jindal had some good advice for conservatives:

Jindal: Trump is a madman who must be stopped

By Bobby Jindal
Last week, I said on national television that Donald Trump is a shallow, unserious, substance-free, narcissistic egomaniac.
It’s pointless arguing policy with someone not intellectually curious enough to care and who makes it up on the fly. According to him, his plans will be “fabulous” and “something terrific.”
His problem with Washington isn’t big government, it’s that he’s not running it. He’s not liberal, moderate or conservative. He’s not Republican or Democrat. Donald Trump is for Donald Trump. He believes only in himself.
[…]
Conservatives need to say what we are thinking: Donald Trump is a madman who must be stopped.
[…]
We face a choice: We can decide to win, or we can be the biggest fools in history and put our faith not in our principles, but in an egomaniac who has no principles. It’s time for Trump to take the ride down his own elevator. It’s time we rally behind a serious candidate.
===========================
If you are a Republican, good luck with finding “a serious candidate” to support!
If you do find one, please make sure to tell everyone who this mystery candidate is.