I’m off to a conference in Ireland, and I’ll be doing some touristing around while I have the chance. And when I get back, I take off again, now to California, in a few days.

We’ll see if anyone else picks up the slack, or if this will be a quiet June on this blog.

Time, once again, to advertise the “Jesus and Mo” online cartoons. 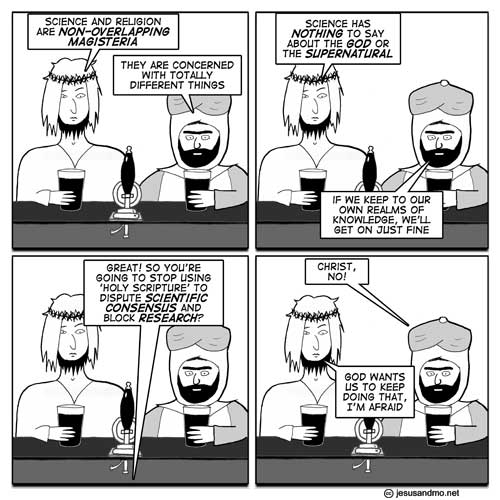 It’s easy to get pissed off at religion, particularly the conservative monotheistic variety. Think of the Catholic hierarchy, or your favorite set of mullahs. Get your blood boiling over the misogyny, the homophobia, and the general attitude toward sexuality that is always stuck in ancient agrarian social realities. Roll your eyes at the boneheadedness regarding medical options, indifference toward the natural environment, and inability to extend genuine concern beyond the pale of orthodoxy.

After all, religion is remarkably flexible, and examples that do not fit the conservative monotheistic mold are not difficult to find. My guess is that we can make a very long list of liberal, humane attitudes that we would want a properly secular moral outlook to endorse, and that practically everything on that list would be in principle adoptable by a religious movement, if it is not so already. It’s very hard to sustain a general statement like “religion is misogynist.” Even if you point out that the most influential religions have very often been so, it’s next to impossible to disentangle this from historical considerations that have little to do with the bare notion of supernatural agents, or the simple attitude of faith.

So instead imagine a religion that is as close to a humane, liberal ideal as it gets. But then take these moral qualities you are positive towards, and imagine that a religious community were to strengthen their commitment to these ideals by believing that their God or gods endorsed exactly these humane attitudes. Imagine that these positive moral qualities were reinforced by the demand that believers take them by faith. What could still be wrong?

Let me throw out a few possibilities. (With any luck, commenters will supply others.)

I could go on, but the picture should be clear. I’m inclined to think, right now, that my objections to supernatural faith per se, stripped of the actual religious beliefs we’re historically stuck with, are fairly minor league.

There is one possibility that may change this picture. That would be to show that somehow there is a stronger coupling than I’ve been assuming between the obnoxious aspects of organized religion and the very notion of supernatural faith. In that case, imagining a fully humane religious movement would be an interesting exercise, but also a very artificial one. Supernatural faith, then, might not directly bolster inhumane, illiberal attitudes, but it might still indirectly provide support.

I don’t have a good argument for such a strong coupling, however. I’m not even sure I’d know how to start.

Sorry for another long absence. I’ve been working on a project, and a draft of part of it is below. I present part of Robin Collins’ defense of the fine-tuning argument (FTA) and a brief response. Comments would be appreciated.

And a generic salvation story. Africans play the lead roles, but there’s nothing specially African about it.

On the face of it, the presence of premise (2) appears to confirm Hume’s Law, the idea that an “Ought” statement cannot be derived from an “Is” statement, that a moral judgment cannot be validly deduced from purely factual or descriptive statements.

Georgoudis appears to need a normative principle, namely premise (2), in addition to factual or descriptive claims, namely premises (1) and (3), in order to reach the moral judgment in the conclusion (5).

However, it is perhaps a bit hasty to conclude that Hume’s Law prevails in this case. Consider the following line of reasoning:

The presence of premise (7) might lead one to think that (8) cannot be validly deduced from (6) alone. But, in fact, (6) alone does logically entail (8). Premise (7), since it gives a correct analysis of the meaning of the word “triangle” is a logically necessary truth, an analytic truth. So, (7) is not required to make the inference valid. The explicit statement of premise (7) might make the inference from (6) to (8) more clear or more obvious, but because it states an analytic truth, it is not essential to the validity of the argument.

For non-USAnians who might be reading this, I have to point out that all the US is not as crazy as this (Alabama). Or perhaps I should phrase that differently. We may well be all as crazy as Alabama Christian conservatives, but we’re not always crazy in exactly the same ways. California-crazy is different from Alabama-crazy and so forth.

Academia can be a rich source of weirdness. Personally, I’m fascinated by paranormalist physics-abuse as it percolates through popular culture, and, let’s face it, quite a few places outside of physics. Here’s a lovely example: somebody presented a paper at a conference called “The Semiotics of Time.” From the announcement on H-Net:

Some scientists believe that viral DNA dispatched from an alien cosmic civilization has been transferred into the DNA of earth’s organisms. In relation to this idea of ancient viral DNA, but not in support of its alien dispatch, a published paper presented at the 34th Annual Meeting (October, 2009) of The Semiotic Society of America (SSA), an interdisciplinary professional organization grounded in the logic of American philosopher and scientist Charles Sanders Peirce, is now available online at no charge at www.isisthesis.com.

. . . the Peircean theme of crystallized mind, the Egyptian transformation of the dead King into a hybrid pyramidal form of millions, and the four-faced ancestral transformation of the early Chinese Yellow Emperor may point to the polyhedral form of an ancient lambdoid virus, suggesting the possibility of afterlife horizontal gene transfer and viral lytic replication (cloning) from here to eternity. The semiotic approach also explores the backward-in-time aspect of quantum observations, as well as the ascent/fall ontological structure of consciousness as framed by Swiss psychiatrist Ludwig Binswanger in relation to Heidegger’s thought. Put simply, mind may act as a cosmic unifying force.

Visit the web site; it’s thoroughly crazy. And fun. At least occult weirdness is a break from monotheistic varieties of mind-rot.

Chris Hedges’s column today, “After Religion Fizzles, We’re Stuck With Nietzsche” claims that mainstream Christian and Jewish religion is in decline, and that the kind of secular options that might replace religion are nothing to be enthusiastic about.

I think he underestimates the resilience of religion—particularly the right wing, magical-thinking, enthusiastic forms of religion he does not have much use for. It looks like conservative Christianity and Islam will continue to go strong, ensuring that the worst of monotheism will always be with us.

Still, if Hedges is right that the more moderate forms of monotheistic religiosity are in decline, it is worth asking whether this is a good thing. Nonbelievers tend to think so; usually I have little sympathy for the empty “sophistication” of liberal theologies. But socially liberal decline might not be so good a thing. I suspect Hedges may be right in that we don’t have a serious secular alternative to put in place. Secular thought has certainly proved incapable of putting up much resistance to neoliberal madness.

In every possible world, modal logic is a useless waste of time.