Because Dr. Norman Geisler is unclear and confused in his use of the word “God”, he fails to properly conclude his case for the existence of God in his book When Skeptics Ask (hereafter: WSA).
But this failure is easily fixed.  I will reconstruct the final inference of his case for God in this post.  First, here is a comment that indicates part of what Geisler thinks he has proven:
We have said that God is all-powerful, all-knowing, all-good, infinite, uncreated, unchanging, eternal, and omnipresent. (WSA, p.28)
Geisler also thinks that his initial arguments, from Phase 1 of his case, have shown that the following claims are true:

Geisler also believes that these four beings are one and the same being, although he does not provide any reason or argument for this crucial assumption:

We can infer a concept of God from these various claims, and construct a concluding argument that summarizes Geisler’s case for the existence of God in just two premises:
GEISLER’S OVERALL ARGUMENT

This is a much improved version of Geisler’s overall argument.  His actual overall argument was weighed down (and sunk) by  overkill.  Premise (2A) appears to be true to me.  The logic is fine (a standard modus ponens inference). So, the evaluation of this argument rests on our evaluation of the first premise.
Even though we have significantly pared down the elements of premise (1), this claim remains extremely dubious, because there is not one single element of this claim for which Geisler has actually provided a solid argument.  Every one of the seven elements of premise (1) is dubious and unproven.  Thus, we ought to reject this argument, and therefore reject Geisler’s unbelievably crappy case for God.

I’m going to take a step back in this post and look at the overall structure of Geisler’s case for the existence of God, a presented in When Skeptics Ask (hereafter: WSA).
PHASE 1: GEISLER’s FIVE WAYS
On pages 15 through 26, Geisler presents five arguments for five conclusions.  I call this Phase  1 of this case.  Here are the five conclusions of the five initial arguments:

Note that the word “God” is being misused by Geisler in the statement of the fifth conclusion.  The purpose of his case is to prove that “God exists”, so a premise that begins, “If God exists, then…” is of no use in his case.
As with many of the arguments that I have examined in Geisler’s case, he is using the word “God” in an idiosyncratic sense, which he does not bother to clarify or define.  So, we have to examine the context of each such claim in his case to figure out what the hell he means each time he misuses the word “God”.  (This is part of why I say that this case is a steaming pile of dog shit; Geisler does not bother to clarify or define the meaning of the most important word in his argument.)
PHASE 2: THE CREATOR’S PERSONAL ATTRIBUTES
On pages 26 and 27,  Geisler presents Phase 2 of his case.  He argues for three claims related to personal attributes of “God”:

Once again, Geisler misuses the word “God” here.  But he gives us a good clue as to what he means by “God” in his Phase 2 arguments:
The argument from design shows us that whatever caused the universe not only had great power, but also great intelligence.  (WSA, p.26, emphasis added)
Geisler had argued in the previous paragraph that based on his two cosmological arguments “God” had great power.  Then Geisler uses his argument from design to try to show that “God” had great intelligence.  The above quoted statement implies that the word “God” is being used in the narrow sense of “whatever caused the universe”.  Roughly speaking, the conclusions that Geisler argues for in Phase 2 are more clearly stated as follows:

So, Geisler is arguing that there exists a cause of the universe, and that this cause has various personal attributes that are part of the ordinary meaning of the word “God”.
PHASE 3: THE EXISTENCE OF A NECESSARY BEING
Yet again, Geisler abuses the word “God” in Phase 3 of his case for the existence of God.  The argument in Phase 3 is on page 27.  It makes use of the conclusion from “The Argument from Being” in Phase 1 (pages 24-26). Here is how Geisler states the conclusion of this part of his case:

Clearly, he is NOT using the word “God” in its ordinary sense here.  Presumably, he actually means something like this:

Since I have not yet closely examined the argument in Phase 3, I’m not sure that this is the best interpretation of this key conclusion, so an important part of analyzing and evaluating the argument in Phase 3 will be to figure out what the hell Geisler means by the word “God” when he asserts that “God is a necessary being.”
PHASE 4: THE IMPLICATIONS OF “A NECESSARY BEING”
On pages 27-28, Geisler presents Phase 4 of his case.  There are two different sets of alleged implications that Geisler argues follow from the existence of a necessary being.  First there are implications related to God’s “metaphysical” attributes (as contrasted with God’s personal attributes above):

Second, there are alleged conditional implications of the concept of a necessary being:

Geisler then uses the conclusions from Phase 2 and Phase 3 in order to argue for this conclusion:

PHASE 5: ONLY ONE INFINITE BEING
In a short paragraph on page 28, Geisler argues that there cannot be multiple beings of the sort that he thinks he has shown to exist:

PHASE 6: GOD EXISTS
Although Geisler never provides a definition of the word “God”, it is fairly clear that he assumes a meaning of the word “God” that is something like this:
X is God IF AND ONLY IF:

So, the ultimate conclusion of Geisler’s case is this:

Here, finally, the word “God” is being used in something like it’s ordinary sense. 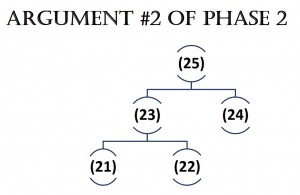 Here is a diagram of this argument (with the conclusion at the top, and the premises below it): 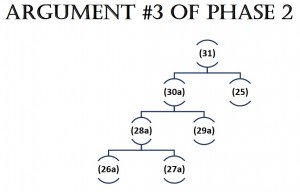 16. The universe had a beginning (in the distant past).
17. Anything that has a beginning must have been caused to begin to exist by something else.

THEREFORE:
1. The universe was caused to begin to exist (in the distant past) by something else.

Premise (17) is ambiguous in terms of the quantification implied by the phrase “caused by something else”. Here are two different interpretations of premise (17):
17a.  Anything that has a beginning must have been caused to begin to exist by exactly one other thing or being.

17b. Anything that has a beginning must have been caused to begin to exist by at least one other thing or being.

I am something that had a beginning, and my beginning was caused by TWO other beings: my mother and my father.  So, it appears that (17a) is a FALSE generalization.  If Geisler had intended premise (17) to refer to “exactly one” being, as spelled out in (17a), then the second premise of his first argument is FALSE, and that argument is thus UNSOUND.
However, we can be charitable and assume that what Geisler had in mind was (17b), which is not subject to the counterexample that I just gave.  If we interpret premise (17) to mean what is stated in (17b), then we need to also revise the conclusion, so that it follows logically from the combination of (16) and (17b):

16. The universe had a beginning (in the distant past).

17b. Anything that has a beginning must have been caused to begin to exist by at least one other thing or being.

1a. The universe was caused to begin to exist (in the distant past) by at least one thing or being other than the universe.


This conclusion, however, falls short of showing the truth of the assumption that Geisler needed to prove:

13. There is a being that created the whole universe by itself (in the distant past).

We can, for example, imagine one being causing the basic matter of the universe to come into existence, and another being orgainzing that matter into stars and planets, and solar systems and galaxies.  The being who caused the matter of the univese to come into existence would not be the creator of our universe, in that the major astronomical components of our universe were not brought into existence by that being.  The being who took the raw materials provided by the frst being and organized that matter into stars, planets, solar systems, and galaxies, might, however, be justifiably called the “creator” of our universe.
Or, possibly, neither of these beings would be accurately described by the term “the creator of the universe”, because they might both be considered “partially responsible” for the origin of our universe, in which case it seems misleading to call either being “the creator”.  In any case, the cause of the beginning of the universe need not be “the creator” of the universe, so we cannot legitimately infer (13) from (1b).
The first argument from Geisler’s Phase 1 fails to support premise (11b) in the first argument of Phase 2 of his case for God. There is clearly a logical gap between the conclusion of the first argument of Phase 1 and the premise (11b) of the first argument of Phase 2. The former argument FAILS to establish the truth of claim (13), and thus FAILS to provide support for premise (11b). What about claim (14)?  Does the second argument in Phase 1 of Geisler’s case show that claim (14) is true?  Let’s take a closer look at the second argument in Phase 1 of Geisler’s case (WSA, p.18-19): 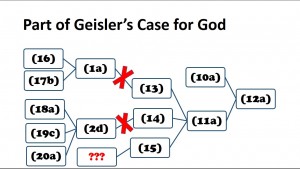 NOTE:
Premise (15) is a placeholder for one or more claims that when taken together show that a being that created the whole universe by itself (in the distant past) and a being that sustains the current existence of the whole universe by itself (right now) must be the same being.  Geisler does not give us any reason to believe these beings are the same being.
Later on, he does argue that there can be only ONE being of infinite power and infinite knowledge, but that argument presupposes the truth of (11a) and (12a) and thus is of no help in proving the truth of (11a) at this earlier stage of his case. 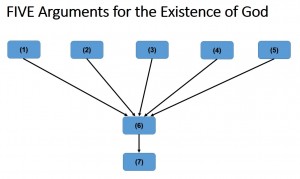 The last step of the argument is from premise (6) to the ultimate conlcusion (7):
(6) There currently exists a being that caused the universe to begin to exist, and this being is all-powerful, all-knowing, all-good, infinite, uncreated, unchanging, eternal, and omnipresent. (WSA, p.26 and p.28)
THEREFORE:
(7) God exists.
It is very tempting for Christian believers and Christian apologists to view a case for God this way, because on this view the believer has five chances to win.
On this view, if just ONE of the five arguments is a sound argument, then the case for God works.  On this view, even if each one of the five arguments is somewhat questionable (containing a premise of uncertain truth or an inference of uncertain validity), so long as each argument has some significant probability of being a sound argument, then there would be a good chance that at least ONE argument is sound, and thus there would be a good chance that the overall case for God works, and that God actually exists.
Unfortunately for Geisler and his Christian readers, this is NOT how the logic of Geisler’s case actually functions.  In reality, his case for God consists of just ONE argument that requires each of his five arguments to be sound in order for his case for the existence of God to be successful.  It is actually the skeptic who has five chances to win, because if just ONE of the five arguments is an unsound argument, then Geisler’s case for the existence of God FAILS.
Here is a diagram showing the actual logical structure (at a high level) of Geisler’s case for God: 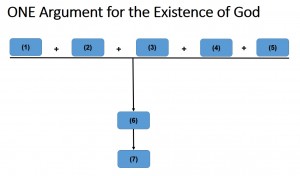 These conclusions need to be cleaned up and clarified, so that we have an accurate understanding of what they mean:

If God exists, we conceive of Him as a necessary Being.