Consider the following argument by Alvin Plantinga:
“The premise is that there is real and objectively horrifying evil in the world. Examples would be certain sorts of appalling evil characteristic of Nazi concentration camps: guards found pleasure in devising tortures, making mothers decide which of their children would go to the gas chambers and which would be spared; small children were hanged, dying (because of their light weight) a slow and agonizing death; victims were taunted with the claim that no one would ever know their fate and how they were treated…Naturalism does not have the resources to accommodate or explain this fact [the existence of objective evil] about these states of affairs. From a naturalistic point of view, about all one can say is that we do hate them; but this is far short of seeing them as intrinsically horrifying. How can we understand this intrinsically horrifying character?…A good answer (and one for which it is hard to think of an alternative) is that this evil consists in defying God, the source of all that is good and just, and the first being of the universe. What is horrifying here is not merely going against God’s will, but consciously choosing to invert the true scale of values…(The Shorter Routledge Encyclopedia of Philosophy , p. 326).”
In short, Plantinga asserts that unless we postulate the existence of God, we cannot have a basis for saying that some things are objectively and intrinsically horrifying. Since we do hold that some things are objectively and intrinsically horrifying, we should postulate the existence of God.
I think that a neo-Aristotelian ethical naturalist could reply as follows: On, the contrary, for us cruelty is intrinsically horrifying for precisely the reason you mention: It is the conscious choice to invert the true scale of values. For the ethical naturalist the true scale of values is a matter of biological fact. There are certain objective states of affairs that constitute eudaimonia, which is the state of greatest value for human beings. Eudaimonia is a state of mental and moral excellence with the enjoyment of a modicum of health and material prosperity. Objective evil consists in the destruction of human life or the imposition of conditions that prevent humans from achieving or enjoying such well-being.
If values are thus based on the facts of human biology and psychology, there is no need for ethicists to refer to God. If God opposes human well-being, then he himself is evil because he opposes what is objectively good and therefore consciously inverts the true scale of value. On the other hand, if God endorses objective goodness, then his endorsement is irrelevant. Even if an act conforms to God’s will, and even if God is essentially good, what makes a good act good is that it is conducive to the achievement of the human telos, not that it conforms to God’s will. So, God’s will can just be left out of the account. Explanations of goodness of good and evilness of evil need make no reference to God, but only the scientific facts. [This, of course, is a version of the old “Euthyphro” dilemma: Are things good because God wills them, or does God will them because they are good?” I am not convinced that theists have yet effectively discharged this dilemma.
Naturally, Plantinga would be unsatisfied with this answer. He would want to know why, given that there is an objective state of human well-being—we ought to value this state. What would a naturalistic ethicist say, for instance, to Dostoevsky’s Underground Man, who simply thumbs his nose at human well-being, choosing spite over happiness? What arguments could the naturalist offer to say why the Underground Man should value happiness? Isn’t the naturalist limited to saying merely that we do value happiness, and so has nothing to say to the Underground Man—who doesn’t value it?
It is true that the ethical naturalist would have nothing much to say to someone who genuinely disdains all happiness, including his own. If human well-being is the summum bonum, then there is no higher good that can be invoked to justify it. But, to offer a tu quoque, could the theist do any better? What could the theist say to the Underground Man that would help? Of course, the theist could threaten him with hell, a sanction the naturalist cannot deploy. But the traditional doctrine of an eternal, punitive hell is one hard to square with any plausible conception of goodness. (As I have argued. See “Heaven and Hell’ in Debating Christian Theism, edited by J.P. Moreland, Chad Meister, and Khaldoun A. Sweis.). Besides, if the Underground Man chooses spite over happiness, why wouldn’t he spitefully defy God’s will? In fact, isn’t this just what sin is traditionally conceived to be?
Plantinga appears to hanker for a categorical imperative, a pure, context-less “thou shalt” with the universal authority of necessary truth. The problem is that grounding a categorical imperative in God’s nature seems no more promising than grounding it in human nature. Even to say that God is essentially good does not help because this is to explicate God’s nature in terms of goodness, not explicate goodness in terms of God’s nature—which is what we need.
The upshot is that the existence of objectively horrifying evil is no basis for postulating God. 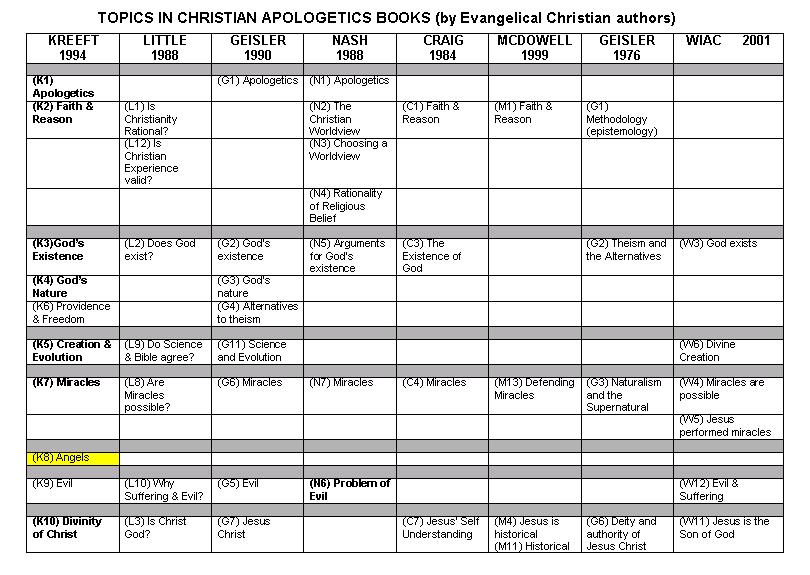 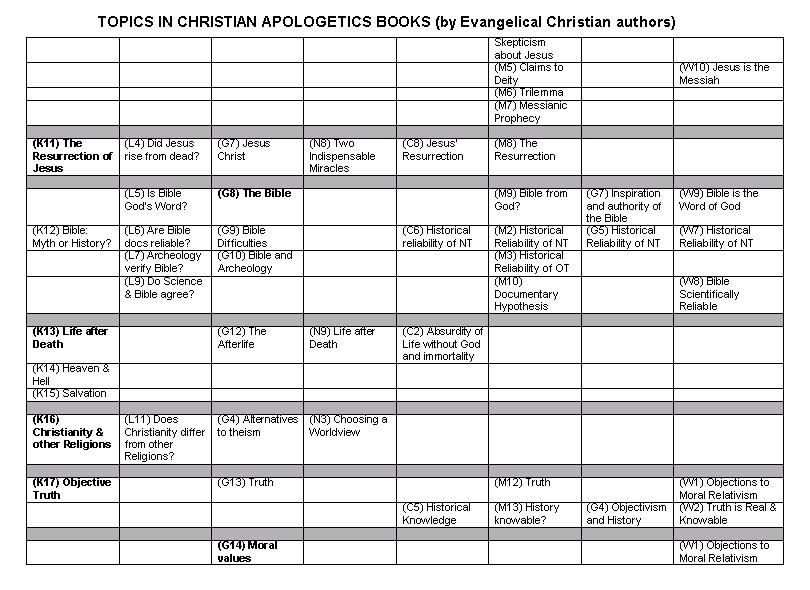 NOTE: WIAC = Why I am a Christian, edited by Geisler & Hoffman
Based on this quick survey of a few handbooks of Christian Apologetics, I came up with a list of a dozen topics:
1. Apologetics/Faith & Reason
2. The Existence & Nature of God
3. Creation & Evolution
4. Miracles
5. Evil & Suffering
6. The Divinity of Jesus
7. The Resurrection of Jesus
8. The Bible
• Historical Reliability of the Bible
• Scientific Reliability of the Bible
• Inspiration of the Bible
9. Life after Death/Heaven & Hell/Salvation
10. Christianity vs. Other Religions
11. Objective Truth
12. Morality/Ethics

I also took a look at a few works of Systematic Theology by Evangelical Christian theologians: 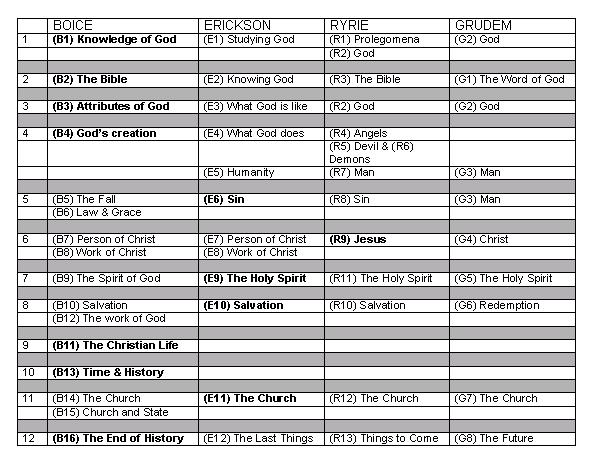 For an excellent and inpiring example of a critique of a bit of Systematic Theology, see Theodore Drange’s article “Why Resurrect Jesus?” in The Empty Tomb, edited by Robert Price and Jeff Lowder (Prometheus Books, 2005).
NOTE: BOICE’s stuff on “Time and History” appeared disjointed and unfocused, and there does not appear to be a clear parallel in other Systematic Theology books, so I set that topic aside and substituted “Man” for topic #10 (pulling it out of where it was lumped in with other items under “God’s creation”, topic #4).
Here is a comparison chart of common Theology topics with common Apologetics topics: 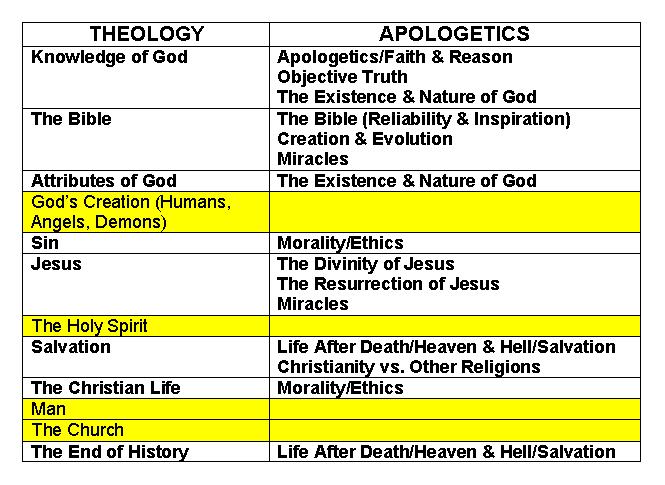 Based on this comparison chart, if I had to choose between covering the topics of Systematic Theology and the topics of Christian Apologetics, I would go with Apologetics. Those topics seem more focused on what is central and most important, especially in terms of evaluating the truth or the rationality of Christianity.

I’m starting to build a plan for a ten-year project for myself. The goal will be to produce a multi-volume critique of Christianity, with a focus on Evangelical Christianity, but I would also like to touch on Catholic Christianity and Liberal Christian views.
One objective would be for the critique to be systematic and comprehensive, so I’m thinking about Topics and Issues to cover. Since my educational background is in philosophy (ethics, philosophy of religion, logic, critical thinking, epistemology, metaphysics, philosophy of language, political philosophy, Plato, Aristotle, Augustine, Aquinas, Descartes, Locke, Hume, Kant, Mill, Marx, Wittgenstein), the most obvious choice for topics would be based on:
1. Handbooks and Guides on the Philosophy of Religion.
Since I am especially familiar with the work of one leading modern Christian philosopher of religion, my topics could be based on:
2. Richard Swinburne’s Trilogy on Theism and his Tetralogy on Christian Doctrines.
Another set of topics closely related to philosophy of religion would be based on:
3. Handbooks and Guides on Christian Apologetics (esp. McDowell, Craig, Geisler, Habermas, Kreeft, Nash, etc.).
A somewhat broader range of topics could be based on:
4. Works of Systematic Theology (esp. by Evangelical Christian theologians).
If I go with the Systematic Theology topics, I could start by focusing on the core of Evangelical Christian theology:
5. The Gospel (i.e. John 3:16, The Four Spiritual Laws, The “Romans Road”).
Another way to plan and organize this project would be to use a high-level logical analysis:
6. A Problem-Solving/Medical Schema for Analysis of Worldviews (i.e. symptoms, diagnosis, prescription/therapy, prognosis).
Worldviews can be understood in terms of identifying a particular problem that is viewed as critical or central to human existence, and presenting an alleged solution to that problem. Note that the topics in approach (5) would closely match topics for approach (6), since “The Four Spiritual Laws” look a lot like a problem-solving analysis of the Gospel.
I am interested in hearing your suggestions or advice.