Skip to the content
2022 Internet Infidels Fundraising Drive / $35,125.00 of $40,000.00 / 87.81% Failing to heed science and reason has real-world consequences. We need critical thinking now more than ever. Help us maintain a drop of sanity by donating to keep the Secular Web online today! Donation Options

Extract from my OUP book Humanism: A Very Short Introduction, which references the Alpha Course (it’s from chpt 7)

Religion vs. shallow, selfish individualism
Let’s now turn to religious practice. Setting aside the issue of whether God exists, perhaps it might still be argued that religious reflection or observance is required if our lives are not to be shallow and meaningless. Here is one such argument.
It is sometimes claimed, with some justification, that religion encourages people to take a step back and reflect on the bigger questions. Even many non-religious people suppose that a life lived out in the absence of any such reflection is likely to be rather shallow. Contemporary Western society is obsessed with things that are, in truth, comparatively worthless: money, celebrity, material possessions, etc. Our day-to-day lives are out often lived out within a narrow envelope of essentially selfish concerns, with little or no time given to contemplating bigger questions. It was religious tradition and practice that provided the framework within which such questions were once addressed. With the loss of religion, we have inevitably slid into selfish individualism. If we want people to enjoy a more meaningful existence, we need to reinvigorate religious tradition and practice (some would add that we need, in particular, to ensure young people are properly immersed in such practices in school).
There is some truth in the above argument. Religion can encourage people to take a step back and contemplate the bigger issues. It can help break the hypnotic spell that a shallow, individualistic culture can cast over young minds.
However, religion can itself also promote forms of selfishness – such as a self-interested obsession with achieving ones own salvation or personal enlightenment. And of course religion has itself been used to glorify material wealth, by suggesting that great wealth is actually a sign of God’s favour.
Is it true that only religion encourages us to think about the big questions? No. In chapter 1 we saw that there is another long tradition of thought running all the way back to the Ancient world that also addresses the big questions – a secular, philosophical tradition. If we want people, and especially children, to think about such questions, we are not obliged to take the religious route. We can encourage them to think philosophically.
Indeed, as I point out in chapter 6, there is evidence that introducing philosophy programmes into the curriculum can have a dramatic impact on both the behaviour of pupils and the ethos and academic standing of their schools.
Most contemporary humanists are just as concerned about shallow, selfish individualism as are religious people. They too believe it is important we should sometimes take a step back and consider the big questions. They just deny that the only way to encourage a more responsible and reflective attitude to life is to encourage children to be more religious.
If we want to encourage young people to really think about the big questions, philosophy is, arguably, a much more promising approach. The Church of England poses the question “Is this it?” on billboards and buses, promising those who sign up to their Alpha Course “An opportunity to explore the meaning of life”. However,when the religious raise such questions, they are often posed for rhetorical effect only. They are asked, not in the spirit of open, rational enquiry, but merely as the opening gambit in an attempt to sign up new recruits. Unlike religion, philosophy does not approach such questions having already committed itself to certain answers (though it does not rule out religious answers, of course).  Philosophy really does encourage you to think, question and make your own judgement – an approach to answering the Big Questions that, in reality, many religions have traditionally been keen to suppress.

Recommendation: If you are interested in exploring the meaning of life, an alternative to the Alpha Course is to get into Philosophy instead. Why not try this?! 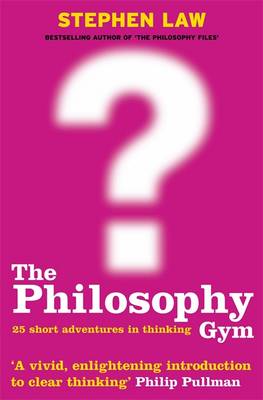