Here’s a photo that’s a part of a story run by The Daily Mail, “The Talibanisation of British childhood by hardline parents”: 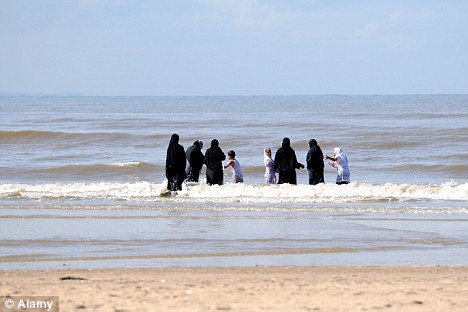 The caption: Joyless: A Muslim family stay covered up as the[y] bathe on a British beach.

The “joyless” assumption is understandable. After all, they’re all wrapped up in clothes that restrict movement; such clothes hardly seem appropriate attire for frolicking around on a beach. Determined to follow religious rules, they deny themselves the pleasures of running and swimming unencumbered. Joyless indeed.

But I’ve seen my share of conservative Muslims bathing, ridiculous attire and all. They don’t seem all that joyless: this group in the photo also seems to be having fun.

The clothing, in fact, is not the only difference noticeable in the photo, when compared to a beach scene composed of half-naked Westerners. The people in the beach scene are not dispersed, doing their own thing or acting in small groups. They are standing close to one another, even though there is room to spread out. In all likelihood the photo depicts an extended family, enjoying the beach together.

A conservative Muslim might well say that this is exactly the point: a beach is a joyful occasion for this family. They might look at a beach scene of Westerners and be more impressed with the lack of large family groups; they might be inclined to interpret it as a sad scene of individual isolation rather than joyful enjoyment of a beach.

In this view, the restrictive clothing is not an arbitrary imposition, but a vital device to protect the integrity of the family in public circumstances. In an isolated family compound, free from the public gaze, all the protective clothing would come off. But in a public environment, particularly a non-Islamic environment full of all sorts of temptations and dangers to the structure of the family, protective measures are necessary.

Secular liberals often look at conservative Muslims, and perceive them as oppressed by all sorts of onerous and arbitrary restrictions on their personal freedom. Maybe. But conservative Muslims often see themselves as protecting their families—the proper context in which a fully human, emotionally satisfying life can be led. They can even perceive liberal Westerners as acquisitive automatons, pursuing individual ambitions, oppressed by their lack of strong human connections but not even aware of the fact.