Here’s an example from a Turkish Islamist newspaper, Vakit. It’s old news, from last month, and Türkan Saylan, the woman pictured, just died a week or two ago. But the level of nastiness is still impressive. 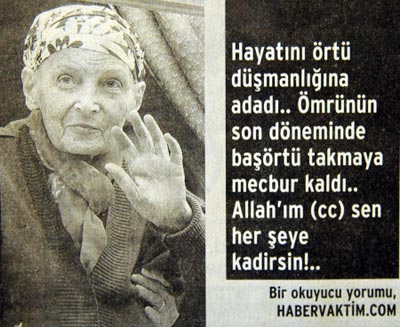 The commentary next to the picture of the dying Saylan, undergoing chemotherapy and its associated hair loss in the last stages of her struggle with cancer, is supposed to be a comment by a reader. It says “She dedicated her life to enmity toward the [Islamic] headscarf. At the end of her life she was forced to wear a headscarf. My God you are capable of everything!”

Saylan was a leading medical doctor, and a staunch secularist, much reviled by the Islamist press.