WHERE WE ARE
Edward Feser has put forward a version of the Perverted Faculty Argument (hereafter: PFA) against homosexual sex, so I will now examine that argument in the hopes that it is an actual argument consisting of actual claims.  Based on his book Five Proofs of the Existence of God, Feser understands the need to define and clarify the meanings of keywords and phrases in philosophical arguments.  I am hoping that in his presentation of PFA,  Feser will define and/or clarify the meanings of keywords and phrases in his version of PFA so that it constitutes an actual argument that is composed of actual claims.  If I find his effort to constitute an actual argument, then I will attempt to rationally evaluate that argument.
In Part 1 of this series of posts, I attempted to clarify the core argument in Feser’s PFA, based on his summary of that argument in his book Neo-Scholastic Essays (hereafter: NSE) on pages 403 and 404.

Does Feser provide useful definitions or clarifications of the meanings of the keywords and phrases in these sentences that are, apart from such efforts, too UNCLEAR to make it so the sentences may reasonably be treated as actual claims?

WHAT DOES THE CONCLUSION MEAN?
Because the conclusion of an argument is the main point of the argument, it is generally best to start an examination of an argument by focusing on the conclusion.  Because CLARIFICATION is often needed to understand the meaning of a statement and thus be in a position to rationally evaluate the statement, it is generally best to start an examination of a statement by working to clarify the meaning of that statement.  I have already made one attempt to clarify the conclusion of the core argument in Feser’s PFA, but it is still UNCLEAR.  So, I will continue to work at achieving a better understanding of this statement:

There are at least three UNCLEAR phrases in this statement:

Because NONE of these three phrases has a clear meaning, (5a) is UNCLEAR and cannot be rationally evaluated as it stands.  These are three main parts or components of the statement (5a), and each part must be CLARIFIED.  Apart from a definition or clarification of each one of these phrases, it will not be possible to have a clear understanding of the meaning of (5a), and apart from such a clear understanding, it will not be possible to rationally evaluate this statement, nor to rationally evaluate an argument given in support of this statement.
Breaking down (5a) into its main parts or components, into these three phrases, is part of the process of ANALYSIS.  The point is to take a big task or problem, like CLARIFYING (5a), and turn it into smaller, easier to manage problems.  So, instead of having one big problem, we now have three smaller problems to manage.

WHAT DOES THE PHRASE “ENGAGES IN HOMOSEXUAL ACTS” MEAN?
In my previous examination of a PFA presented by Tim Hsiao one of the reasons that I rejected that argument as a worthless piece of intellectual garbage is that Hsiao made NO EFFORT to clarify the meanings of the key phrases “homosexual activity” and “sexual activity”.  So, we are walking down the same path with Feser’s version of a PFA.  The main question now is whether Feser made any effort to clarify the meaning of the UNCLEAR phrase “engages in homosexual acts”.  If Feser attempted to clarify the meaning of this phrase, then his version of PFA might be able to go beyond the FAILED attempt by Hsiao to present a version of PFA.
According to Feser, his article “In Defense of the Perverted Faculty Argument” in Neo-Scholastic Essays is his most detailed and systematic treatment of sexual morality (as of June in 2015):

Feser uses the phrase “homosexual acts” thirteen times in his article defending PFA.  However, he NEVER DEFINES what this phrase means, and he NEVER attempts to CLARIFY the meaning of this phrase.  Because the phrase “homosexual acts” is an UNCLEAR and AMBIGUOUS phrase, we don’t know what the hell the conclusion of the core argument in PFA means, and thus it is not possible to rationally evaluate the core argument of Feser’s PFA.

THE GENERAL UNCLARITY OF FESER’S PFA
This lack of clarity is not confined to just the key phrase “homosexual acts”.  There are other key phrases in Feser’s PFA that he also FAILS to DEFINE or to CLARIFY: 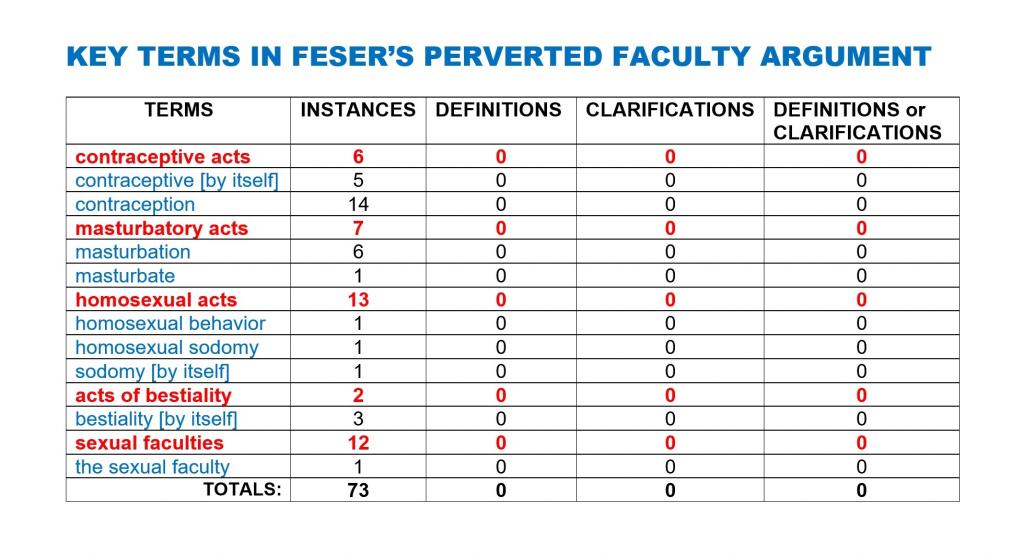 The phrases in bold red font appear in Feser’s summary of the PFA, and the other terms and phrases in blue font are closely related terms that appear in the article.  There are a total of 73 instances of these terms and phrases in the article, and as you can see from the chart above there are ZERO DEFINITIONS of these terms, and ZERO attempts to provide CLARIFICATIONS of these terms by Feser.
Although the phrase “sexual faculties” does not appear in the conclusion of Feser’s PFA, nor in the conclusion of the core argument in PFA, it does appear in three out of the six premises of his PFA, and is clearly a key concept in the argument:

CONCLUSION
Feser’s PFA is just as UNCLEAR as the PFA presented by Timothy Hsiao.  In both cases we are dealing with a PSEUDO argument, something that looks and sounds like an argument, but that is composed of UNCLEAR statements which cannot be rationally evaluated, and thus neither “argument” is an actual argument, because an argument consists of CLAIMS, statements that are clear enough to be understood and to be rationally evaluated.
According to Feser his article in Neo-Scholastic Essays defending his version of the Perverted Faculty Argument is the “most detailed and systematic treatment of sexual morality” he has ever written, but that article is a pathetic piece of intellectual garbage that presents us with a PSEUDO argument that only pretends to be an actual argument.