Skip to the content
2022 Internet Infidels Fundraising Drive / $34,028.00 of $40,000.00 / 85.07% Failing to heed science and reason has real-world consequences. We need critical thinking now more than ever. Help us maintain a drop of sanity by donating to keep the Secular Web online today! Donation Options

TRUMP’S “LOCKER ROOM” TALK
Let’s take a quick trip down memory lane… to October 7, 2016:
================
The Washington Post has obtained an extremely crass recording…on which Donald Trump converses with Access Hollywood host Billy Bush about women aboard a bus on the set of Days of Our Lives. Among the things Trump says:
“I moved on her like a bitch, but I couldn’t get there, and she was married. Then all of a sudden I see her, she’s now got the big phony tits and everything.” …
“I’m automatically attracted to beautiful [women]—I just start kissing them. It’s like a magnet. Just kiss. I don’t even wait. And when you’re a star they let you do it. You can do anything … Grab them by the pussy. You can do anything.“
[from a SLATE article, emphasis added:
Trump Was Recorded in 2005 Bragging About Grabbing Women “by the Pussy”]
==============
This infamous video recording made it appear that Donald Trump was a sexist, a Male Chauvinist Pig, to be precise.  But “the Donald” disagreed.  He respects and admires women, and treats them as equals to men.  His words quoted above were just “locker room” talk, he protested.
However, it was obvious to anyone with two brain cells to rub together that Donald Trump was indeed a sexist and a Male Chauvinist Pig, and that this was exceedingly clear long before the video tape became public knowledge.
The video recording was simply a very graphic and disturbing reminder of what was already known about Trump and his attitude towards women.  Nobody but a complete fool would believe that his comments were just “locker room” talk, and that his comments did not reflect his disgusting sexist attitude towards women.

JEHOVAH’S “LOCKER ROOM” TALK
Let’s go back a bit further in time, to after the Israelites had left Egypt, and were on their way across the desert headed for the Jordan river.
Jehovah had some advice for his people, the Israelites, before they entered the land on the other side of the Jordan river, and Moses delivered Jehovah’s advice to them:
1 When the Lord your God brings you into the land that you are about to enter and occupy, and he clears away many nations before you—the Hittites, the Girgashites, the Amorites, the Canaanites, the Perizzites, the Hivites, and the Jebusites, seven nations mightier and more numerous than you—
2 and when the Lord your God gives them over to you and you defeat them, then you must utterly destroy them. Make no covenant with them and show them no mercy.  Deuteronomy 7:1-2  (New Revised Standard Version, emphasis added).
According to the book of Joshua, Joshua and the army of Israel followed the above guidance from Jehovah:
19 There was not a town that made peace with the Israelites, except the Hivites, the inhabitants of Gibeon; all were taken in battle.
20 For it was the Lord’s doing to harden their hearts so that they would come against Israel in battle, in order that they might be utterly destroyed, and might receive no mercy, but be exterminated, just as the Lord had commanded Moses.   Joshua 11:19-20 (New Revised Standard Version, emphasis added) 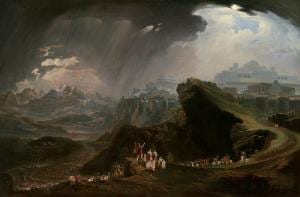