The Christian sacrament of Communion can be viewed according to two main competing theoretical perspectives. The first can be called the “symbolic presence” account, according to which the bread and wine are nothing more than symbolic representations of the body and blood of Jesus. On this view, to participate in Communion is to participate in a purely symbolic ritual. Christ is not in any sense literally present in the bread and wine; his presence is merely symbolized by them. 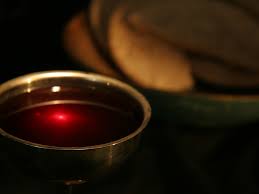 The second account, of which there are multiple distinct variants, can be called the “metaphysical presence” account. On the metaphysical presence account, there is some sense in which Christ is somehow actually “in” the bread and wine (whether by transubstantiation or some other process). Taking communion does not merely symbolically relate one to Christ, but actually does so – whatever that means. I have tried in vain to comprehend the details of any metaphysical presence accounts that does not ultimately reduce to the bare assertion that “Christ, himself, is present in the Host.” Also, I have to say I just don’t understand the point of communion on any metaphysical presence view – what, exactly, does taking the presence of Christ into your body actually do, anyway? But let’s leave such nitpicky details aside for the present.

The theory presented here can be called the “Homeopathic Christ” theory, because of its resemblance to the manner in which homeopathic medicines are (allegedly) made.
I say that the puzzle raised here is “mostly silly” because I find it hard to take any metaphysical presence view seriously enough in the first place to spend too much mental effort on its implications. The puzzle itself only arose within the context of a light-hearted conversation with a friend. Also, the puzzle seems easy enough for Christians to resolve: Just give up all metaphysical presence theories in favor of a symbolic presence view.
A second option would be to reject claim #2. This would be a natural option for proponents of transubstantiation. The same reasons that count against homeopathy, in general, would apply against the homeopathic Christ theory. If the wine is actually blood, it could be diluted to the point where no blood is left. The problem here is that transubstantiationists seem (as far as I can understand it) to hold that the wine is the actual blood of Christ in respect of substance, where “substance” is a sheer metaphysical add-on: “yes, it looks, tastes, and has all the chemical properties of wine, but it is really blood in respect of substance” (to which I can only respond, “huh?”). [*I note that this isn’t the view that is presented when trying to defend some miracles where alleged chemical analysis is said to have tested positive for actual blood. See, for instance: http://www.therealpresence.org/eucharst/mir/lanciano.html] This also seems to raise the question of why and how the non-physical substance of Christ would or even could be diluted if it isn’t made up of molecules. Here consubstantiationism seems preferable to transubstantiation (maybe), but only marginally so — there is still the question of how the substance of Christ can be matched up with quantities that reduce to molecules when such quantities seem to be completely irrelevant within the context of the ritual: It seems that Ferd has missed the point if he says, “I feel extra sinful this week: better give me two glasses of wine instead of one.”
Alternatively, it would be easy to avoid the homeopathic Christ theory by invoking a second miracle; if Christ can miraculously become present in the bread and wine at the beginning of the ceremony, he can surely leave when it is concluded. This would also eliminate the need to lose any sleep over disposing of extra wine, since upon concluding the ceremony it would miraculously revert to ordinary wine again. The same would hold of accidental spills of wine. Christ can intend to be present in the wine if and only if it is consumed by a person in the context of a Communion ceremony. So no one should worry about a spill. Christ ceases to be present in the wine as soon as it is spilled. In fact, given the simplicity of such a solution, it is rather amazing to me that it hasn’t become a standard aspect of the metaphysical presence view.
Denominations that wish to resist such concessions owe an account of where the homeopathic Christ theory goes wrong.