If most people lie and if most people lie frequently, then that is a good reason to be skeptical.
In previous posts I have provided evidence that very young children lie and that most children  lie, that most teenagers lie and cheat and lie and cheat frequently, and that most college students lie and lie frequently.  Now it is time to look into whether and how much college students cheat.
There are two main kinds of cheating by college students that I will be providing evidence about: (1) academic cheating, and (2) cheating (and lying) in romantic relationships.  First, lets look at some evidence on academic cheating by college students:
=========================
Understanding Academic Misconduct
Julia M. Christensen Hughes – University of Guelph
Donald L. McCabe – Rutgers University
Canadian Journal of Higher Education
Volume 36, No. 1, 2006, pages 49 – 63.
[Emphasis added]
[There is]…a growing body of primarily U.S.-based research that suggests academic misconduct has become commonplace amongst the majority of college and university students…(p.50)
Results of U.S.-based studies have consistently shown that many students engage in academic misconduct in the completion of their academic work and that academic institutions and faculty have done little about it (see for example, Bowers, 1964; Hetherington & Feldman, 1964; Singhal, 1982; McCabe, & Trevino, 1993, 1996; Payne & Nantz, 1994; McCabe, Trevino, & Butterfield, 1999, 2001). (p.51)
Rates of Engagement in Academic Misconduct (p.51-52)
Purportedly, academic misconduct has always been with U.S.. It has been described in the higher education literature as “ubiquitous” (Pincus & Schmelkin, 2003); as an “epidemic” (Haines, Diekhoff, LaBeff, & Clark, 1986, p.342), a “perennial problem” (Davis, Grover, Becker, & McGregor, 1992, p.16), and “one of the major problems in education today” (Singhal, 1982, p.775). Such observations are primarily based on studies of undergraduate students at U.S. colleges and universities (both private and public), using a variety of data collection techniques (e.g., self report surveys, in-depth interviews, experiments), and differing sample sizes (e.g., from less than one hundred students in a single department to thousands of students on multiple campuses).
Although they vary in methodology, these studies have consistently found that the majority of undergraduate students have engaged in some type of misconduct in the completion of their academic work. For example, in Bower’s (1964) seminal multi-campus study involving over 5000 students from 99 U.S. campuses, three out of four students reported engaging in at least one of 13 questionable academic behaviours, with 39% of students reporting having engaged in “serious test cheating” (e.g., copying during an exam with or withoutthe other student’s knowledge, using crib notes, helping someone else to cheaton a test or exam) and 65% reporting having engaged in “serious cheating on written work” (e.g., plagiarism, fabricating or falsifying a bibliography, turningin work done by someone else, copying a few sentences of material without footnoting).
In a similar 1990-1991 study involving over 6,000 students across 31 small to medium sized U.S. campuses, McCabe and Trevino (1993) found that as many as two out of three students reported engaging in at least one of 14 questionable behaviours and that almost 20% of students reported engaging in 5 or more such behaviours. In this case, 64% of students were found to have engaged in serious test cheating and 66% in serious written cheating.
Smaller, single campus studies have also reported high rates of academic misconduct. For example, Hetherington and Feldman (1964) used an experimental design in which 78 psychology students at one U.S. state university were presented with multiple opportunities to cheat on actual course exams. More than half (59%) of the students exhibited some form of cheating, the vast majority (87%) of whom were observed to cheat multiple times. Payne and Nantz (1994) used in-depth interviews to study the cheating behaviours of 22 business students in a medium-sized, U.S., state university. Nineteen (or 86%) of the students admitted to having cheated in their college work. Finally, Singhal (1982) surveyed 364 engineering students at a U.S. state university; 56% of students reported having cheated.
=================================
Some of the data from the above mentioned studies is shown in the following table (click on image below to get a clearer view of the table): 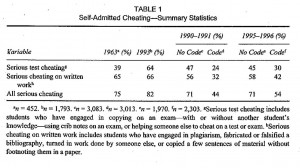