Skip to the content
2022 Internet Infidels Fundraising Drive / $33,723.00 of $40,000.00 / 84.31% Failing to heed science and reason has real-world consequences. We need critical thinking now more than ever. Help us maintain a drop of sanity by donating to keep the Secular Web online today! Donation Options

If most people lie and deceive, and if people often lie and deceive,  then we have good reason to be skeptical.  We have seen in previous posts that most children lie and lie frequently,  and that most teenagers lie and cheat and do so frequently; it is now time to take a look at the behavior of college students.
A study of lying in everyday life was conducted in which one group consisted of college students and a second group consisted of community members (ranging from 18 to 71 years old).  The participants each kept a  journal for one week in which they were to write down each social interaction and each lie they told.
The results of the study were summed up this way [emphasis added]:
=======================
Lying Is a Fact of Daily Life
The studies reported here provide some of the first data, and by far the most extensive data, on some of the most fundamental questions about lying in everyday life. As we expected, lying is a fact of daily life. Participants in the community study, on the average, told a lie every day; participants in the college student study told two. One out of every five times that the community members interacted with someone, they told a lie; for the college students, it was one out of every three times. Of all of the people the community members interacted with one on one over the course of a week, they lied to 30% of them; the college students lied to 38% of the people in their lives. (p.991)
“Lying in Everyday Life”
Journal of Personality and Social Psychology
1996, Vol. 70, No. 5, 979-995
Bella M. DePaulo – University of Virginia
Deborah A. Kashy – Texas A&M University
Susan E. Kirkendol – Pfeiffer College
Jennifer A. Epstein – Cornell University Medical College
Melissa M. Wyer – University of Virginia
http://www.communicationcache.com/uploads/1/0/8/8/10887248/lying_in_everyday_life.pdf
viewed 11/25/14
========================
Only one of the college students claimed to go a whole week without ever lying.  That one student, of course, might well have been lying in claiming to have never lied that week.  If the students in this study are representative of college students in general, then ALMOST ALL  college students lie, and MOST college students lie on a DAILY basis.
Another study compared a group of high school students with a group of college students.  In this study, the students were asked (in questionnaires) if they had lied to their parents on various topics (friends, alcohol/drugs, parties, money, dating, and sex) at least once in the past year.  Here is a summary of the results [emphasis added]:
========================
Lying to parents was indeed a frequent behavior among the adolescents and emerging adults. Figure 1 shows the percentages of students who had lied to their parents about 6 different issues at least once within the past year. As can be seen, the percentage of high school students who had lied about the different issues ranged from 32 to 67% whereas for college students the range was 28–50%. Eighty-two percent of all students indicated that they had lied to their parents about at least 1 of the 6 issues during the past year. (p.105) 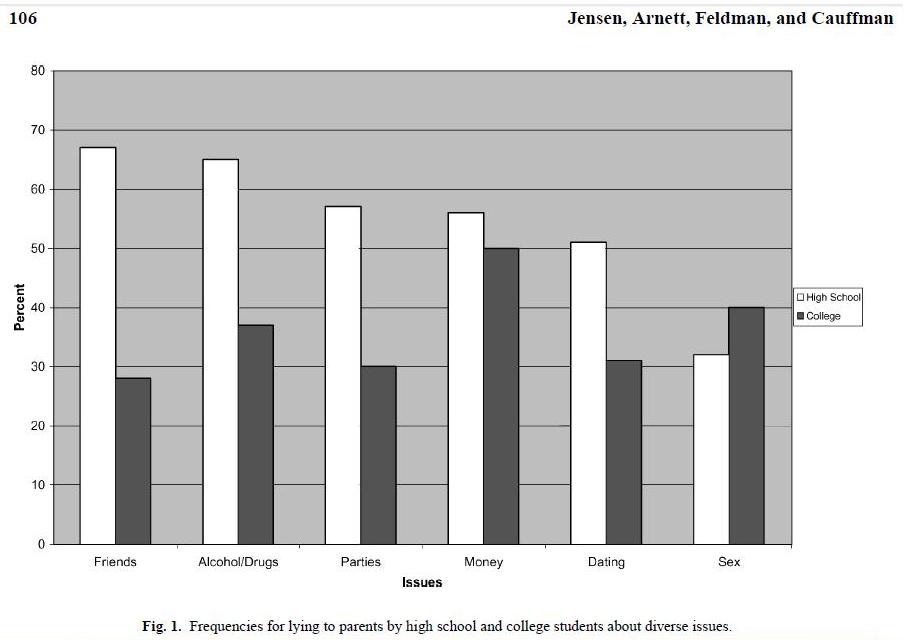