This post is part of a series on Paul Draper’s classic version of the evidential argument from evil. In the previous entry, I explained Draper’s terminology and summarized the logical form of Draper’s two arguments. In this entry, I focus on Draper’s first argument, which attempts to show that known facts about the biological role of pain and pleasure are much more probable on the hypothesis of indifference than on the hypothesis of theism.
1. Background Knowledge
Like all abductive arguments, background knowledge plays a crucial role in Draper’s evidential argument from evil. Draper’s formulation suppresses reference to background knowledge, i.e., his probability notation does not explicitly contain a symbol to represent the propositions which constitute the relevant background knowledge. In the interest of clarity, however, I’m going to reformulate Draper’s argument so as to explicitly identify the role of those propositions. If we let “B” stand for our background knowledge, then Draper’s first argument may be restated as follows.

As I interpret him, the following propositions constitute the relevant background knowledge B.
B1: Pain and pleasure, if they exist, have intrinsic moral value.
B2: A physical universe–which operates according to natural laws, is intelligible, and which supports the possibility of intelligent life–exists.
B3: Living things, including sentient beings, exist on Earth. These sentient beings include, but are not limited to, human beings.
B4: Some (Earthly) sentient beings are not moral agents but are biologically very similar to embodied moral agents.
B5: Humans are goal-directed organic systems, composed of parts that systematically contribute to the biological goals of these systems.
2. Draper’s Defense of Premise (1′): Pr(O1 / HI & B) !> Pr(O1 / T & B)
B5 gives us some antecedent reason to expect that pain and pleasure (P&P), if they exist, will also systematically contribute to those goals, just as O1 reports. But, as B1 reports, notice that, unlike other parts of organic systems, P&P have intrinsic moral value: “pain is intrinsically bad and pleasure is intrinsic good.” This difference (hereafter, “moral difference”) between P&P and other organic systems is crucial to Draper’s argument.
First. consider HI. On HI & B, Draper argues this moral difference gives us no reason at all to be surprised by O1. HI entails that, if P&P exist, then they are not the result of “malevolent or benevolent” supernatural persons. Therefore, on HI, the moral difference between P&P and other parts of organic systems provides no reason whatsoever to predict that P&P “will not play the same biological role that other parts of organic systems play.” In other words, blind nature is indifferent to moral value.
Second, consider T. On T & B, Draper argues this moral difference does gives us good reason to predict that O1 is false. T entails that, if P&P exist, God is responsible for their existence. Since God is morally perfect, He would have good reasons for producing pleasure even if it is never biologically useful, and He would not permit pain unless He had, not just a biological reason, but also a morally sufficient reason to do so. Furthermore, since God is omnipotent and omniscient, He could create goal-directed organic systems (including humans) without biologically useful P&P. So T entails both:
(a) that “God does not need biologically useful P&P to produce human goal-directed organic systems;” and
(b) “that, if human P&P exist, then God has good moral reasons for producing them, reasons that … might be inconsistent with P&P contributing to the biological goals of those systems.”
Thus, we have much less antecedent reason on T & B than on HI & B “to be surprised if it turned out that human P&P differed from other parts of organic systems by not systematically contributing to the biological goals of those systems.” In other words, Pr(O1 / HI & B) !> Pr(O1 / T & B). 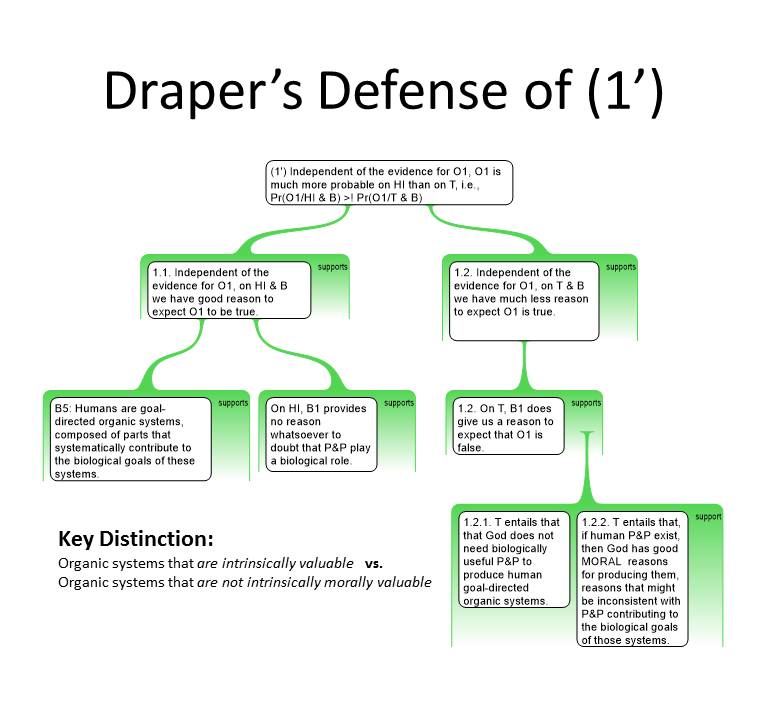 O2 reports the observations and testimony reported by O about sentient beings that are not moral agents (e.g., young human children and nonhuman animals) experiencing pain or pleasure that we know to be biologically useful.

Draper’s defense of (2′) is based upon the insight of B4. For the convenience of the reader, I’ll state it again:
B4: Some (Earthly) sentient beings are not moral agents but are biologically very similar to embodied moral agents.
Since O1 implies that moral agents experience biologically useful P&P, HI & O1 & B makes it likely that some sentient beings that are not moral agents will also experience biologically useful P&P. But the corresponding, parallel claim about T is not true: T & O1 & B do not make O2 just as likely HI & O1 & B do. Given T & O1, “we have reasons to believe that God permits the pain O1 reports because it plays some sort of (presently indiscernible) moral role in the lives of the humans that experience it. But the pain O2 reports cannot play such a role, since the subjects of it [hereafter, ‘moral patients’] are not moral agents.”
The distinction between moral agents and moral patients isn’t relevant to Pr(O2 / HI & O1 & B), but it is relevant to Pr(O1 / T & O1 & B). This distinction gives us some reason on T & O1 & B to expect that “the good reasons God has for permitting moral agents to experience pain and pleasure do not apply to moral patients.” This, in turn, gives us some reason to believe that God will not permit such beings to experience pain. 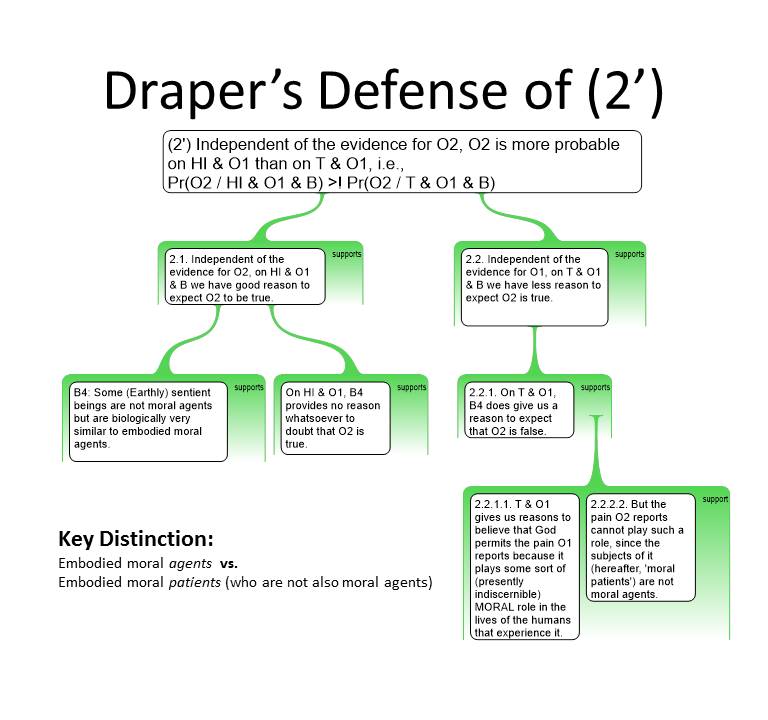 And here is the terminology. 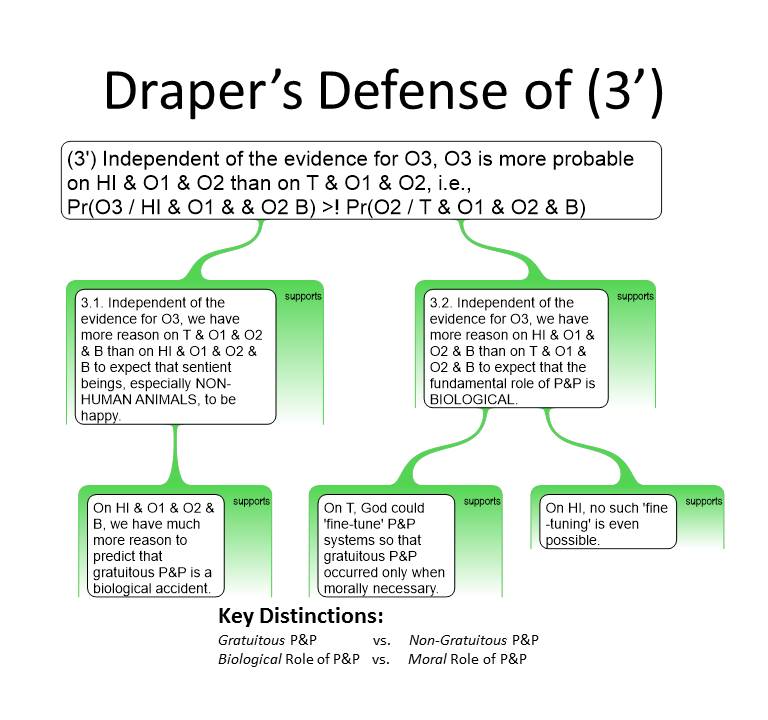 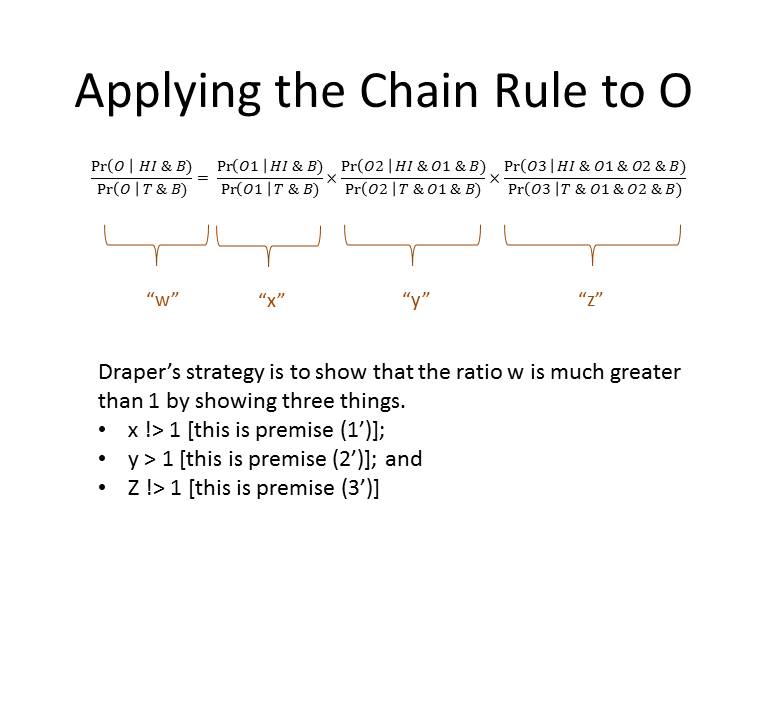