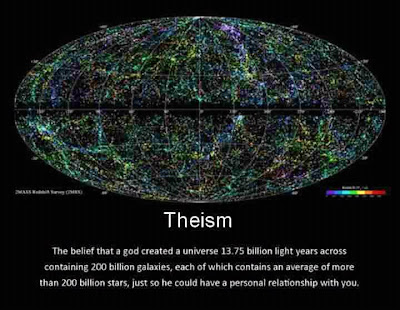 As a nitpick, theism by itself does not say anything about God
having a personal relationship with anyone. Only sectarian versions of
theism, such as Christian theism, make such claims.

Putting that aside, another worry I have about this graphic is that it seems to attack a caricature of what theists believe. God could have multiple purposes for creating the universe; I don’t see any reason to think that even Christian theism says that the sole reason for the universe’s size is human beings.

Jewish and Christian theism do teach that man is created in the image and likeness of God. (Islam may teach that also; I don’t know.) So on Jewish and Christian theism, humanity does have a special kind of significance. But, on the assumption that we are created in the image of God, I don’t see why it would follow that the size of the universe should be on a human scale. The image of God doctrine, as I understand it, seems to be about humanity’s role on earth and the attributes which differentiate humans from non-human (Earthly) life, not the size of our earthly domain compared to the size of the universe.

Index: The Evidential Argument from Scale