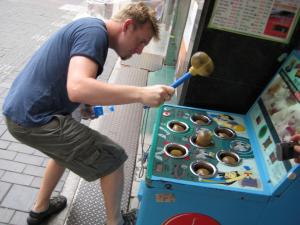 William Lane Craig once gave a talk entitled, “Top 10 Worst Objections to the Kalam Cosmological Argument.” Along the same lines, maybe someday I should a talk entitled, “Top 10 Worst Objections to the Argument from Evil.” But, for now, I want to focus on just one of the top ten objections, the idea that the argument from evil (for atheism) can be flipped on its head into an argument from evil (for theism).
I’ve refuted this objection over and over again, which might lead some regular readers of this blog to complain that I am beating a dead horse. But, since this is a meme which won’t die, I think a better analogy than dead horses is the game of “whack-a-mole.” END_OF_DOCUMENT_TOKEN_TO_BE_REPLACED