A couple of the comments on my previous post (see Unapologetic Review – Part 1) were critical about my provision of details about the general physical characteristics of John Loftus’ new book Unapologetic.  The commenters did not explain WHY this was objectionable, but I suspect it is a matter of childish impatience on the part of the commenters.  I think if they had been more honest and straightforward their objections would have gone something like this:
What about the key ideas and the main arguments? Hurry up and get to the good stuff!  Don’t waste time on trivial and insignificant details about the layout of the book.
I don’t accept this objection to Part 1 of my review, but I understand the sentiment.  For others who also feel a bit impatient about getting to the good stuff, I promise that in this post I will not only get to some of the good stuff, but will quickly go from zero-to-sixty, and I will, in just a moment, go right to the heart of the matter.
First, I have just a little bit more to say about the layout of the book.  I previously stated that each of the nine chapters was preceeded by a blank page.  That is not accurate.  Chapters 4 and 6 are preceeded by pages with end notes from the previous chapter, and there is a bit of end notes from the previous chapter just prior to Chapters 2 and 8.  So, instead of nine blank pages, there are actually 6.5 blank pages in the main body of the text.
Here are the titles of the chapters in Unapologetic:

Note the title of Chapter 5: “Why Philosophy of Religion Must End”.  This Chapter title is the same as the subtitle of the book:  Unapologetic: Why Philosophy of Religion Must End.   So, it is reasonable to infer that Chapter 5 is the heart of this book.
Furthermore, in flipping through Chapter 5, I see that Loftus has titled a sub-section of this chapter as “Why Philosophy of Religion Must End”, and in that sub-section of Chapter 5, he has provided a summary of his reasons for believing that philosophy of religion must end (on pages 131-135).   So, those five pages appear to be the heart of Chapter 5.
I plan to start my critique of the case presented by Loftus by analyzing and evaluating the reasons that Loftus presents in those five pages.  My evaluation will, of course, be somewhat tentative, because to be fair to Loftus I need to read the rest of Chapter 5, as well as the other eight Chapters of the book, before I can be confident that my initial responses and criticisms to the reasons given in those five pages are fair, and to be confident that Loftus has not anticipated some or all of my initial criticisms and objections, in other chapters of the book.
In the five pages where Loftus summarizes his reasons for believing that philosophy of religion must end, he numbers sub-sections 1 through 10, so he apparently has ten different reasons to give in support of his main conclusion.  In reading through these ten points, I see that there is a degree of redundance and overlap between the points.  There are clearly some themes here that come up repeatedly.
The two main themes are: (a) his opposition to “faith-based claims” and (b) his opposition to a “parochial” approach to religion.  I have some sympathy to both of these ideas or themes, but I am not convinced that any of the points relating to those two themes provides an adequate justification for the conclusion that philosophy of religion must come to an end.
I agree, to some extent, that philosophy of religion is often taught in a parochial manner and that this is a legitimate criticsm of how philosophy of religion is generally taught.  However, putting an end to philosophy of religion as a discipline amounts to throwing the baby out with the bathwater.  An obviously better approach would be to work at reforming philosophy of religion so that it was generally taught in a non-parochial (or less parochial) manner.  So, the “parochial” objections are based on fact and reality, and represent legitimate criticism of the field of philosophy of religion, but the prescription of ending the discipline is not adequately justified by those reasons.
The other main theme in Loftus’ list of reasons is his opposition to “faith-based claims”.  This theme appears in Reasons #2, #4, #5, #6, #7, #9, and #10.  So, if there is a problem with one of these objections that is based on opposition to “faith-based claims”, then that problem might well infect his whole case and undermine most of his 10 Reasons for ending philosophy of religion.
It appears to me that just as Chapter 5 is the heart of the book, and that the 10 Reasons are the heart of Chapter 5, so also I believe that Reason #9 (which concerns opposition to “faith-based claims”) for ending philosophy of religion is at the heart of the 10 Reasons.
If I can shove a sharp dagger into Reason #9, then I believe that will kill the beast, and stop the beating of the heart of Loftus’ case against the philosophy of religion.
Here is a diagram illustrating my high-level view of Unapologetic: 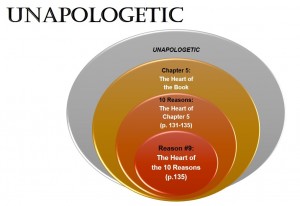 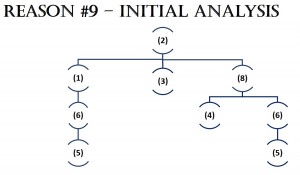 John Loftus’ new book has just been released:
Unapologetic: Why Philosophy of Religion Must End
(Durham, NC: Pitchstone Publishing, 2016)
My copy arrived from Amazon by UPS yesterday.
The text starts on page 7 (the Forward); the introduction starts on page 11, and the main body of the text ends on page 235.  There is a blank page just before the start of each chapter, and there are nine chapters, so there are 9 blank pages in the main body of the text. So, the main body of text runs about 216 pages (235 – 10 pages prior to main body = 225 pages in main body – 9 blank pages  = 216 pages) .  There are end notes at the end of each chapter.
There is also an Appendix A (“My Interview with Keith Parsons”) on page 237, Appendix B (“Robert Price’s Rebuttal to William Lane Craig”) on page 250, and Appendix C (“The Demon, Matrix, Material World, and Dream Possibilities”) on page 257.  Appendix C ends on page 271, and there is one page “About the Author” at the very end of the book, on page 272.
I have not started to read the book yet.   However, I do have some key questions that I will be attempting to answer as I read, analyze, and evaluate this book:
GENERAL CRITICAL QUESTIONS:

GCQ1. Does Loftus provide clear and significant evaluative conclusions about the philosophy of religion?

GCQ2. Does Loftus provide clear and significant prescriptive conclusions concerning how things ought  to change if we accept his evaluation of the philosophy of religion?

GCQ3. Does Loftus present a clear and solid argument (or arguments) for his evaluative conclusions about the philosophy of religion?

GCQ4. Does Loftus present a clear and solid argument (or arguments) for his prescriptive conclusions about the philosophy of religion (based on his evaluative conclusions)?

SCQ1. Does Loftus provide a clear analysis of these concepts: philosophy, religion, and the philosophy of religion?

SCQ4. Does the argument that Loftus makes against the philosophy of religion apply to philosophy in general? or to other respected sub-disciplines of philosophy? or to other clearly legitimate disciplines (science, psychology, sociology, history)?  Does his argument prove too much?

SCQ5. Does the argument that Loftus provides for either his evaluative conclusions or for his prescriptive conclusions depend on a dubious or unclear or ambiguous concept of faith?

Editor’s Note: This is a guest post by Taylor Carr republished on The Secular Outpost with permission. The original post may be found on his blog, The Godless Skeptic.