In his book When Skeptics Ask (hereafter: WSA), Norman Geisler presents his general version of a Thomist Cosmological Argument (hereafter: TCA).  The first premise of Geisler’s TCA is this:

Geisler provides a very brief argument in support of (1) in WSA.  In Part 4 of this series I showed that Geisler’s brief argument in support of (1) was a stinking philosophical TURD.  It FAILS utterly and completely to support ANY part of premise (1).
In Part 5 of this series I clarified and analyzed a longer and more sophisticated  argument by Geisler in support of just one part of premise (1) of TCA, an argument that is found in his much older book Philosophy of Religion (hereafter: PoR).  This longer argument only supports the simple and obviously true claim that “Something exists”.  In Part 6 of this series, I argued that this longer argument by Geisler FAILS.
Geisler also presents arguments for the claim that “changing things exist”, and I will begin to analyze and evaluate those arguments in this post.  Here is the first paragraph Geisler wrote in support of this claim  (PoR, p.192):

Here are the key claims made by Geisler in the above paragraph:

23. I experience other changing things in the world.

24. The whole world of my experience is a space-time continuum of change. 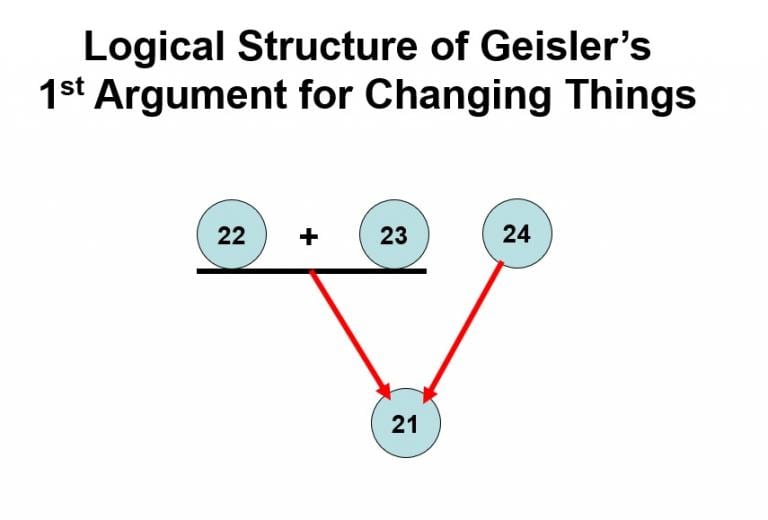 Because Geisler uses pronouns in all three premises, we cannot evaluate those claims as either true or false, unless and until we determine the meaning of those pronouns.  Since Geisler wrote those statements, one obvious interpretation of the pronoun “I” is that this is a reference to himself:

22a. Norman Geisler is a changing thing.

23a. Norman Geisler experiences other changing things in the world.

24a. The whole world of Norman Geisler’s experience is a space-time continuum of change.

I believe that (22a) is true, and I also believe that (23a) is true.  However, I have never met Norman Geisler, and I have not done any historical research about his life.  So, I am not absolutely certain that Norman Geisler exists.
More importantly,  my belief that “Changing things exist” is MORE obvious and MORE certain than my belief that “Norman Geisler exists” or that “Norman Geisler is a changing thing”.  But in order to provide an acceptable deductive proof of the conclusion that “Changing things exist”, ALL of the premises in this deductive argument must be MORE obvious and MORE certain than the conclusion of the argument.  So, given the above interpretations of Geisler’s premises, this argument clearly FAILS.
But perhaps Geisler intends for the readers of his argument to insert their own names into the argument wherever the personal pronoun “I” appears (or “my”).  In that case, I would interpret the argument this way:

22b. Bradley Bowen is a changing thing.

23b. Bradley Bowen experiences other changing things in the world.

24b. The whole world of Bradley Bowen’s experience is a space-time continuum of change.

First of all, we need to toss out premise (24b).  Geisler’s reference to the modern scientific notion of “a space-time continuum” sounds very sophisticated, and it is somewhat sophisticated, but that is clearly a problem with this premise.  There is no way that such a modern scientific idea can be viewed as a self-evident truth, or as a truth that is MORE obvious and MORE certain than the claim “Changing things exist”. (Aristotle firmly believed that “Changing things exist”, but I doubt very much that Aristotle viewed his experience as “a space-time continuum of change”.) So, that premise is worthless for the purposes of this argument.
Premises (22b) and (23b) are more plausibly viewed as self-evident or at least as having a high degree of obviousness and certainty.  But there is a problem, however, with this argument given this interpretation of Geisler’s premises.  Geisler doesn’t know me, as far as I am aware.  He doesn’t know that I exist.  Although I myself might be fairly confident of the truth of (22b) and (23b),  Geisler has no idea whether those claims are true or false.  So, since he has no knowledge or information relevant to determining whether those premises are true or false, it is obvious that he was NOT asserting the truth of (22b) or (23b) when he presented his argument.  This interpretation is clearly mistaken.
Perhaps Geisler intended that the pronoun “I” be viewed in more general terms, as a sort of placeholder for ANY person.  In that case, we could interpret his premises this way:

22c. Every person is a changing thing.

23c. Every person experiences other changing things in the world.

Whoops!  This immediately gets into dangerous territory for Geisler, because the following argument would then be very tempting to make and accept:

22c. Every person is a changing thing.

I myself, accept this as a SOUND deductive argument for claim (26).  But Geisler, as a fan of Thomas Aquinas, would firmly reject claim (26).  Thomists also tend to reject claim (25), but Geisler is not a dogmatic Thomist, so he might well accept (25), but then reject (22c) in order to avoid the conclusion that “God is a changing thing (if God exists).”
Because Thomists strongly affirm that God is unchanging and unchangable (in fact this idea is at the heart of the TCA), I think that Geisler would be very reluctant to agree with premise (22c).  But in that case, this third interpretation of the meaning of Geisler’s premises also seems to be a dubious and mistaken interpretation.
I’m now in a bit of a bind.  On the one hand, if we don’t cash out the meaning of the pronoun “I” in Geisler’s key premises, then we cannot determine whether those premises are true or false.  On the other hand, when I try to cash out the meaning of the pronoun “I” significant problems arise, so that either the argument FAILS or it appears to be a mistaken interpretation.  I am not able, so far, to come up with an interpretation that is both a plausible interpretation of what Geisler meant AND an acceptable deductive proof of the conclusion.
Although I cannot reach a definitive evaluation, it appears to me that Geisler’s 1st argument for the conclusion that “Changing things exist” FAILS.  I do not see any plausible interpretation of the premises of this argument on which the argument would constitute an acceptable deductive proof.