In the same article, Geisler summarizes four of Aquinas’s Five Ways, and then presents a more general cosmological argument that he thinks reflects “a basic form behind all of these arguments [by Aquinas]”.  Geisler provides such a generalized Thomist cosmological argument in his book When Skeptics Ask (hereafter: WSA).
In WSA, Geisler distinguishes two different types of cosmological argument, and gives one argument of each type.  He does not use the terms “vertical” and “horizontal”, but the distinction he makes in WSA appears to be the same one he makes in the above article, just minus the terminology:

There are two different forms of this argument, so we will show them to you separately.  The first form says that the universe needed a cause at its beginning; the second form argues that it needs a cause right now to continue existing.  (WSA, p.16).

3. There cannot be an infinite regress of these causes.

4. [There is]…a first uncaused cause of every finite, changing thing that exists.

(WSA, p. 18 & 19. I left out the text defending each of the premises; we will get into that later.)
Geisler draws one further conclusion from (4):

This argument shows why there must be a present, conserving cause of the world, but it doesn’t tell us very much about what kind of God exists.

So, I take it that there is another key claim that is inferred from (4):

4. [There is]…a first uncaused cause of every finite, changing thing that exists.

5. There is a present, conserving cause of the world.

Geisler is a professor of philosophy, and he has published dozens of books in Christian apologetics and theology.  You would think that he could manage to produce arguments for God that had “God exists” as the conclusion.   This is not rocket science! This is Philosophy 101, or Critical Thinking 101.  Twelve of Kreeft’s twenty arguments for the existence of God, also do NOT conclude that “God exists”.  So, both Kreeft and Geisler are unclear on the concept that an argument for the existence of God should conclude that “God exists”.
We could repair Geisler’s obviously defective cosmological argument by adding a missing premise to his argument:

5. There is a present, conserving cause of the world.

A. IF there is a present, conserving cause of the world, THEN God exists.

Now we can see the basic structure of Geisler’s argument: 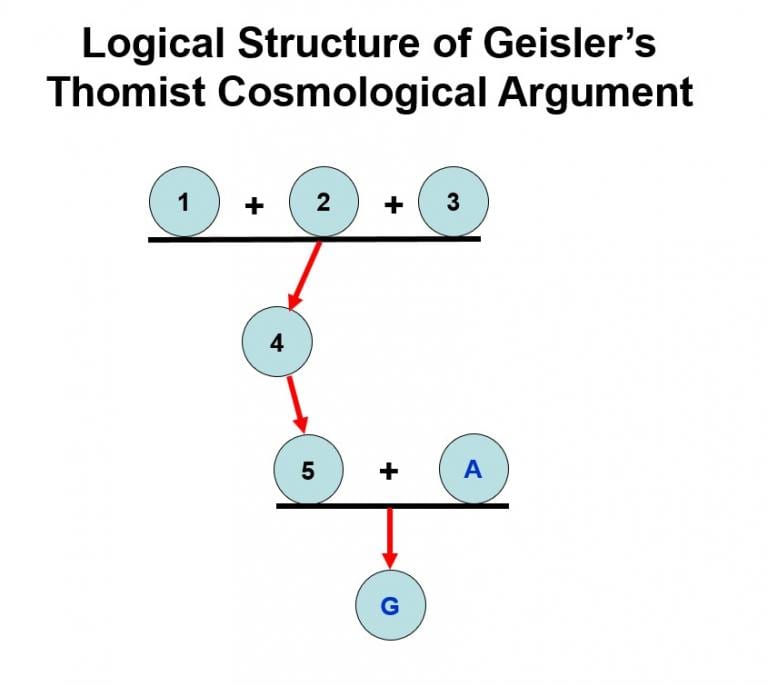 There are a couple of reasons why I’m not sure that adding premise (A) is the best way to represent Geisler’s Thomist cosmological argument.  First, premise (A) seems obviously to be FALSE, so this re-construction of Geisler’s argument might be thought to be a Straw Man.
Second,  Geisler understands that none of his arguments show that “God exists”, given the ordinary meaning of that statement (i.e. There exists a bodiless person who is the creator of the universe, and who is eternally omnipotent, eternally omniscient, and eternally perfectly morally good.).
So, in WSA after Geisler presents five basic arguments, he then attempts to cobble his various arguments together into an overall case for the conclusion that “God exists”.  He fails utterly and pathetically at this attempt, but that is the general structure of his reasoning.  In short, Geisler’s case for the existence of God requires that ALL FIVE of his arguments be SOUND, so that he can use different arguments to show different divine attributes (e.g. cosmological arguments to show divine power and the existence of an eternal creator, an argument from design to show divine intelligence, a moral law argument to show divine goodness).
We can, however, alter the content of premise (A), so that it asserts a conjunction of the conclusions of Geisler’s other arguments, in order to more accurately represent his case for God:

Premise (A1) is clearly a very strong claim, and we would be perfectly reasonable to reject this premise unless all of Geisler’s other arguments were solid.  So, if any of Geisler’s other arguments FAIL or have significant problems, then Geisler’s argument/case for the existence of God FAILS.
Geisler’s argument/case for God works only if ALL of his lower-level arguments are SOUND, only if both of his cosmological arguments (Kalam and Thomist), and his argument from design, and also his moral law argument are all SOUND arguments.  Note: Geisler also has an Ontological Argument, but he doesn’t use it to show the existence of a necessary being.  He uses this argument to show a conditional claim, something like this: “If there is a creator of the universe, then that creator is a necessary being”. This conditional statement plays a role in his overall case for God.
In the next post of this series I will evaluate Geisler’s Thomist cosmological argument, at least the part of it that supports premise (5).  I’m not planning to evaluate premise (A1), because that would require evaluating all of the other lower-level arguments Geisler presents in WSA.