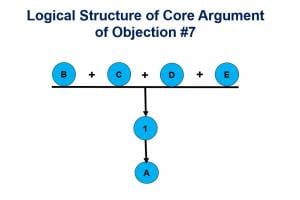 Here is the core argument of Objection #7:

B. Jesus did NOT move the stone from the door of Jesus’ tomb.

C. The Jewish authorities in Jerusalem did NOT move the stone from the door of Jesus’ tomb.

D. The Roman soldiers who were guarding the tomb did NOT move the stone from the door of Jesus’ tomb.

E. Jesus’ disciples did NOT move the stone from the door of Jesus’ tomb.

1. There is no plausible natural explanation for how the stone moved from the door of Jesus’ tomb.

A. The Swoon Theory is FALSE.

In Part 19  I argued that (1) does NOT FOLLOW from the four key premises, because there are several OTHER groups of people that Kreeft has not eliminated as potential movers-of-the-stone:

The inference from the four key premises to the sub-conclusion (1) is clearly a HASTY CONCLUSION, so Kreeft has FAILED to show that claim (1) is true, even if all four key premises are assumed to be true.
Furthermore, the ultimate conclusion (A) DOES NOT FOLLOW from (1).  Even granting, for the sake of argument, that there was some sort of supernatural cause that moved the stone from the entrance of the tomb, this does NOT show that God (or an angel sent by God) moved the stone, because there are OTHER possible supernatural explanations (e.g. ghosts, demons, wizards, finite gods, dragons, fairies, people with telekinetic powers, etc.).
Finally, even if God (or an angel) was the cause of the movement of the stone, it DOES NOT FOLLOW that God (or an angel) raised Jesus from the dead.  Jesus could have survived crucifixion without any supernatural assistance and then God (or an angel) provided supernatural assistance just to help Jesus escape from the tomb.   The movement of the stone by God (or an angel) is compatible with the Swoon Theory being TRUE.
Thus, every single aspect of the core argument of Objection #7 FAILS.  Kreeft has failed to establish ANY of the four key premises of this argument, and the two inferences in the core argument are DUBIOUS or INVALID inferences.  We thus have a total of SIX good and sufficient reasons to conclude that Objection #7 is a complete and miserable FAILURE.

Kreeft’s final objection against the Swoon Theory is that it implies other false theories:

Most simply, the swoon theory necessarily turns into the conspiracy theory or the hallucination theory, for the disciples testified that Jesus did not swoon but really died and really rose.

(Handbook of Christian Apologetics, p.184)
Here is the argument that constitutes Kreeft’s Objection #9:

1. Jesus’ disciples testified that Jesus did not swoon but really died and really rose.

2. If the Swoon Theory is true, then either the Conspiracy Theory or the Hallucination Theory is also true.

3. It is NOT the case that the Conspiracy Theory is true.

4.It is NOT the case that the Hallucination Theory is true.

5. It is NOT the case that the Swoon Theory is true.

Because we already know that at least eight out of Kreeft’s nine objections FAIL (at least 89% of Kreeft’s objections FAIL), it is reasonable to infer that his Objection #9 will probably FAIL too.  So, I’m not going to go into great detail in my evaluation of this final crappy objection.  Kreeft has repeatedly shown that he is intellectually incapable of providing a strong and solid argument for anything, and the problems with Objection #9 are fairly obvious, so I’m going to dispatch this objection quickly.
The inference from premises (2), (3), and (4) to the conclusion (5) is a valid deductive inference, so that inference in this argument is fine.  However, every premise in this argument is FALSE or DUBIOUS, so this argument FAILS, like every other argument Kreeft has made against the Swoon Theory.
Premise (1) implies several historical claims about the twelve disciples (eleven, after the betrayal by Judas), and Kreeft, as usual, makes absolutely no effort whatsoever to provide historical evidence in support of these various historical claims:

As a matter of fact, there is very little information in the New Testament about what Jesus’ disciples said or did after the crucifixion of Jesus. The book of Acts focuses mainly on Peter and on Paul (who was not one of Jesus’ disciples), and has a few mentions of John, but has very little to say about the other disciples of Jesus.  The available historical evidence tells us very little about what Jesus’s disciples did after the crucifixion of Jesus.  So, the available historical evidence is insufficient to establish the basic premise of this argument, premise (1).
The inference from (1) to (2) is INVALID.  I have previously described a scenario in which the Swoon Theory is TRUE and yet Jesus’ disciples honestly and sincerely believed that God had raised Jesus from the dead:

Jesus’ disciples could have heard from the women who observed the burial of Jesus, that there were signs of life, and that Jesus appeared to be alive.  They could have then gone to the tomb of Jesus and found Jesus alive in the tomb, and then taken Jesus to a house in Jerusalem where he could hide out from the Romans and from the Jewish authorities.  If this is what happened, then the disciples might well have assumed that Jesus had died on the cross, and that God had brought Jesus back to life when Jesus was buried (or finished bringing Jesus back to life after his body was placed in the tomb).  In that case the Conspiracy Theory would be FALSE, because Jesus’ disciples would honestly and sincerely believe that Jesus had risen from the dead, even though they had helped Jesus to get out of the stone tomb.

As I have previously argued, there probably were no Roman soldiers guarding the tomb, and even if there were three or four Roman soldiers guarding the tomb, they could have been overpowered by ten or eleven of Jesus’ disciples.
The scenario I described above makes no mention of, and has no reliance upon, the theory that some of Jesus disciples had hallucinations that they took to be experiences of the risen Jesus.  So, it is clear that we can imagine a realistic scenario in which (1) is true, but (2) is false.  So, even if (1) were true, that would NOT PROVE that (2) was true.  The first inference in this argument thus FAILS.
Kreeft has raised some objections against the Conspiracy Theory, but I have examined each objection, and I concluded that every objection Kreeft made against the Conspiracy Theory FAILS.  Kreeft fails to show that the Conspiracy Theory is false.  Kreeft has no strong and solid argument in support of premise (3).  Thus premise (3) remains questionable and dubious.
Kreeft’s Objection #9 FAILS because (a) the main factual premise (1) cannot be established on the basis of available historical evidence, and (b) the inference from premise (1) to premise (2) is INVALID, and (c) premise (3) is dubious because Kreeft has not offered even one solid argument for (3); he has no strong and solid objection against the Conspiracy Theory.
I strongly suspect that Kreeft has no strong and solid argument against the Hallucination Theory either, based on the fact that every single one of his objections against the Swoon Theory and the Conspiracy Theory FAIL.  So, it is very likely that his objections against the Hallucination Theory are just as crappy as all of his other objections have been.  We are justified in being skeptical about the truth of premise (4).

CONCLUSION ABOUT KREEFT’S ATTEMPT TO REFUTE THE SWOON THEORY
Every single one of Kreeft’s nine objections against the Swoon Theory FAIL.  None of those objections refute or disprove the Swoon Theory.  Kreeft appears to be incapable of producing a single strong and solid argument against the Swoon Theory.  His arguments are all WEAK or UNSOUND.  He has put forward so many crappy arguments, that I suspect he is incapable of telling the difference between a STRONG argument and a WEAK one, between a SOUND argument and an UNSOUND one.  His attempt to refute the Swoon Theory is an unmitigated, pathetic, miserable FAILURE.
Furthermore, Kreeft’s complete indifference to FACTS, especially his consistent apathy about EVIDENCE concerning the historical claims and assumptions needed for his arguments to work, not only makes his arguments consistently FAIL, but provides Christians with a horrible example of intellectual sloth.
One reason why the Senate of the United States refused to subpoena any witnesses or documents in the Impeachment Trial of Donald Trump is that the GOP senators believed they could count on their constituents, who are mostly Christian believers, to be UNTROUBLED by the Senate refusing to obtain FACTS and EVIDENCE relevant to the issues before them in the trial.
One important reason why their constituents don’t give a damn about the consideration of FACTS or EVIDENCE in Trump’s trial is that they have horrible examples of “education” and “rationality” like Peter Kreeft,  a Christian philosopher and apologist who doesn’t give a damn about FACTS or EVIDENCE, at least not when he is discussing the question “Did Jesus rise from the dead?”.