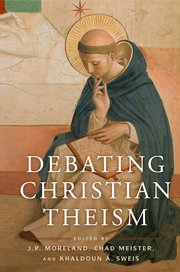 Yesterday I received my contributor’s copy of Debating Christian Theism edited by J.P. Moreland, Chad Meister, and Khaldoun A. Sweis, from Oxford University Press (554 pages). The volume contains forty pro-and-con essays debating topics relating to theism and Christianity. Most of the essays are on familiar topics and written by the “usual suspects.” For instance, the lead-off debate is on the Kalam argument with William Lane Craig and Wes Morriston. This will be familiar ground for those who have followed these debates over the years, but should be an excellent introduction to the issues for newbies. Actually, it might have been good to have brought in a few fresh voices rather than having the old warhorses spar once again. For instance, I would really have liked to have heard another pairing on the fine-tuning argument than Robin Collins and Victor Stenger. For instance, I would very much like to have heard from Taner Edis on this topic.
The debate on the ontological argument pits E.J. Lowe against Graham Oppy, which is a fine pairing. Also sure to be interesting is the debate over the moral argument between Paul Copan and Louise Antony. Oppy also takes on J.P. Moreland in a debate over the argument from consciousness. At this point it would have been good to have Victor Reppert square off against Richard Carrier on the argument from reason.
An odd omission is the lack of any exchange on “Reformed Epistemology” and Alvin Plantinga‘s claim that belief in God can be properly basic. In fact, Plantinga’s ideas are not discussed at all. He gets no mention in the index of the book. This is a real puzzler since Plantinga has surely been a, if not THE, leading figure in the resurgence of philosophy of religion over the last forty years.
There are several exchanges on the coherence/incoherence of divine attributes. Nicholas Everitt and Charles Taliafero on omnipotence looks good, as does Patrick Grim and Jerome Gellman on omniscience. Chad Meister takes on Richard Gale on the problem of evil.
Specific Christian doctrines also are debated. Perhaps worth the price of the book would be the exchange between two true masters of the subject, Richard Swinburne and the late John Hick, on the topic of the Atonement. Katherin Rodgers and Michael Martin debate the Incarnation. (Unabashed self-promotion alert): Jerry Walls and I go at it on the issue of Heaven and Hell. I was a bit surprised to be approached to write this essay since, at the time, I had published very little on the afterlife. However, Walls found the things I had written and addressed these in gratifying detail. I address chiefly what I perceive as the traditional doctrine of an eternal, punitive hell, but I also consider Wall’s very interesting idea of a “second chance” after death. I hope to find time soon to respond further to Walls.
The book is very even-handed with believers and doubters given equal space. It would be good reading for all interested in a survey of these debates and might be an excellent undergraduate text as well.