In Joseph “Rick” Reinckens’s webpage A Lawyer Examines the Swoon Theory we get a short snippet from Origen that allegedly confirms a Roman practice of stabbing victims of crucifixion with a spear:

In his Commentary on Matthew, Origen, one of the early Church Fathers, says the lance thrust to Jesus was administered “according to Roman custom, below the armpit.”  (See Humber, Thomas.  The Sacred Shroud. New York, Pocket Books, 1977)

Neither Reinckens nor Humber give us details about where this comment is to be found in Origen’s Commentary on Matthew.

I believe I located the passage in question in a standard Latin text of Origen’s Commentary on Matthew.  Here is the part that lines up with the snippet given by Mr. Reinckens:


Since I don’t read Latin, I have to rely on Google Translate, at least for an initial take on this passage:

he did not Command, according to the custom of the Romans, they crucify to them that, under her wings, the body of Jesus to be smitten


If the pronoun ‘her’ in the phrase ‘under her wings’ refers to ‘the body of Jesus’, then this phrase could be talking about a blow or strike below or under the arms of Jesus.  I wonder if ‘under her wings’ might also be understood as a reference to Rome.  At any rate, there is no mention of a spear or spear thrust, just the idea of a strike or blow (i.e. ‘smitten’), and it is not clear to me that the blow is to below Jesus’ armpit, as opposed to a blow below his arms, which is an  unclear specification of a location on the body.


If I enter the entire lengthy sentence from this Latin passage, Google Translate gives the following translation:


According to the mode of the other, for he happened to all the people who said to Pilate,  willing to offer, “Crucify him, crucify him”, and one that feared the noise of the people of the whole, it is not ordered, according to the custom of the Romans, they crucify to them that, under her wings, the body of Jesus to be smitten–what they do at any time he that condemneth the wicked deeds of those who are found in more important things (for those who do not, therefore, struck after the torture they endure greater fixionem, but they will live with a great deal of pain, and at any time, however, and all the night, and still, after that all the day long).


Google Translate could not interpret the Latin word ‘fixionem’.  Clearly the general topic here is the crucifixion of Jesus, and there does appear to be a reference to some sort of Roman custom or practice related some way or other to crucifixion, but this translation, at any rate, leaves the nature and purpose of  this Roman custom very unclear.  So, until I can find a better translation of this passage from Origen, I remain unconvinced that this provides any significant evidence for the existence of a Roman practice of thrusting a spear into the chest of a victim of crucifixion in order to ensure the death of the victim.


Here is the entire lengthy sentence in Latin, for anyone who wants to work on producing a better translation: 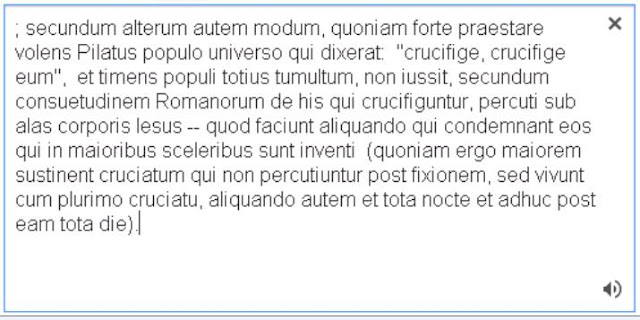 Update (11:45 am Pacific Time on 5/20/12):
I have confirmed that the above Latin passage from Origen’s Commentary on Matthew is the correct passage.


I did a search on the key Latin phrase ‘percuti sub alas corporis Iesus’ and found a book (on Google Books) defending the resurrection that was published in 1744. This book cites the same Latin passage that I located from Origen as evidence supporting the spear wound incident. So this bit of Christian apologetics has been around for over two and a half centuries!

The reference to Origen occurs on page 117: 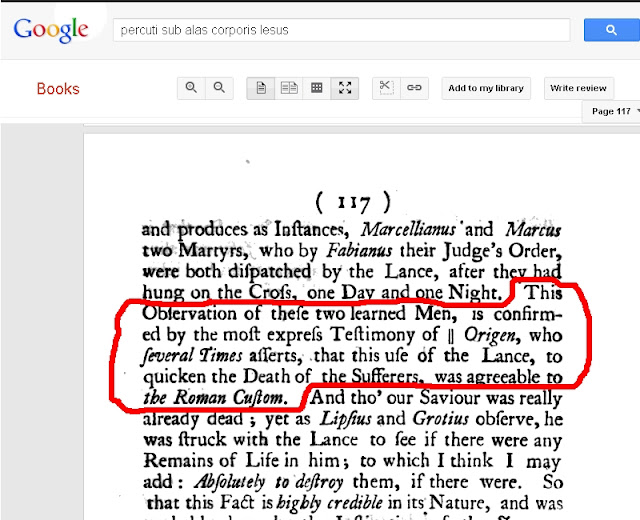 In a footnote at the bottom of page 117, Chandler quotes the same Latin passage that I located: 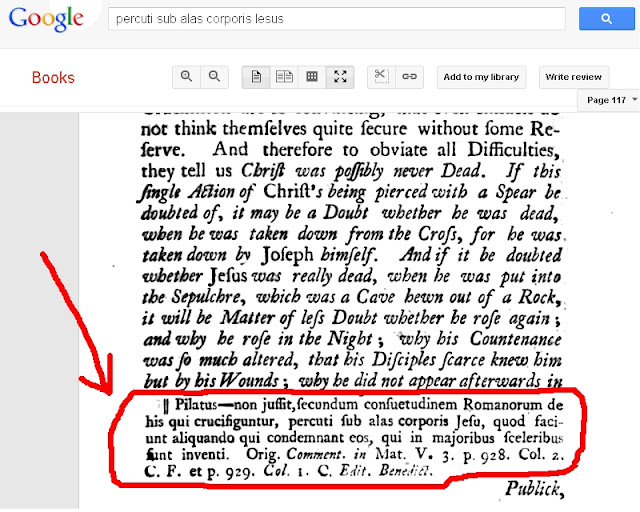 INDEX to Argument Against the Resurrection of Jesus posts:
https://secularfrontier.infidels.org/2012/05/argument-against-resurrection-of-jesus_03.html