The two most important writings on the resurrection of Jesus are, IMHO, Richard Swinburne’s book The Resurrection of God Incarnate (Oxford University Press, 2003; hereafter: ROGI), especially the Introduction (pages 1-6), and Theodore Drange’s short article “Why Resurrect Jesus?” in the collection of skeptical essays The Empty Tomb, edited by Robert Price and our fearless leader Jeff Lowder (Prometheus Books, 2005; hereafter: TET).   [Please feel free to disagree, and/or to offer your own suggestions for the most important writings on the resurrection].
NOTE: I disagree with both Swinburne and Drange on key issues, so my promotion and admiration of their writings does NOT mean that I agree with their conclusions.
I will first explain a bit of Swinburne’s thinking about the Resurrection, and that will help me to show why it is that I view Drange’s article as one of the most important skeptical articles ever written on the subject of the alleged resurrection of Jesus.
Anyone intersted in thinking clearly about the alleged resurrection of Jesus MUST read at least the Introduction to ROGI, and I would also recommend reading the whole book (it’s just under 200 pages long).  Swinburne provides important insights into the logic of the resurrection issue, specifically in pointing out the importance of ‘general background evidence’ and ‘prior historical evidence’.
Here is one comment by Swinburne about general background evidence from the Introduction to ROGI:
The present book is very different from the writing of a typical New Testament expert (whether radical or conservative) on this issue, because only the final third of the book deals with the kind of evidence normally thought by such an expert to be relevant to this issue:  what the New Testament and other early documents had to say about what happened after the death of Christ.  I argue that we need to take into account a far wider range of evidence than that.  To start with, we need to take into account what I shall call ‘general background evidence’ , evidence (the data)  about whether or not there is a God able and likely to intervene in human history in a certain kind of way. …I shall argue that, insofar as the evidence is against the claim that there is such a God [an omnipotent person who would be able to bring about a resurrection], then the occurrence of such an event as the Resurrection is improbable.  If the evidence suggests that there is such a God, then it will give some probability to the occurrence of such a miracle insofar as God has reason to bring about such an event. (ROGI, p.2, emphasis added)
Not too suprisingly, Swinburne’s historical arguments concerning the events after Jesus’ death are not particularly well done.  But that is OK, because other Christian philosophers and scholars have covered that area in greater depth and detail already.
Swinburne is pointing out two major GAPS (or areas of weakness) in the case for Jesus’ resurrection, as typically presented by Christian apologists.  One of the gaps is the failure to make a serious effort to show that God’s character and purposes give God good reason to raise someone from the dead.  A second gap is the failure to make a serious effort to show that Jesus in particular was the kind of person that God would be likely to raise from the dead (‘prior historical evidence’):
Then we need to consider whether, if there is a God with reason to bring about such a miracle, Jesus was the sort of person whom God would have reason to resurrect–and this is a matter of considering the sort of life he led and what he taught.  Assessing this will be what I shall call assessing the prior historical evidence. (ROGI, p.3, emphasis added)
The usual historical evidence concerning the crucifixion of Jesus and what happened after the crucifixion are called ‘posterior historical evidence’ by Swinburne (ROGI, p.3).
Swinburne has laid out the key elements required to make a rational case for the resurrection:
1. General Background Evidence

a. The existence of God

b. The purposes and motivations God has for performing miracles (especially a resurrection)

a.  Jesus’ actions and whether they are the actions of a person God would be likely to resurrect.

b. Jesus’ teachings and whether they are the teachings of a person God would be likely to resurrect.

a. Jesus died on the cross on the same day that he was crucified. (DOC)

b. Jesus was alive and walking around (unassisted) about 48 hours after he was crucified. (JAW) 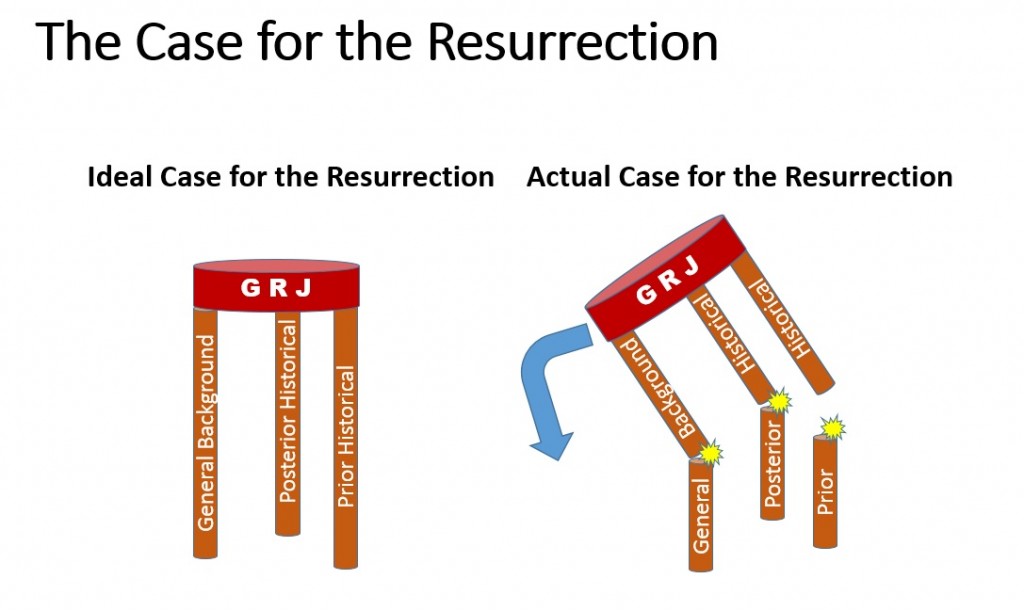 (GRJ) God raised Jesus from the dead.
One important gap in traditional Christian apologetic cases for the resurrection concerns general background evidence.  Obviously, there has been a ton of writing on the question ‘Does God exist?’ so that is not a gap in traditional Christian apologetics.  The gap is in (1b) above, concerning the purposes and motivations God has for performing miracles (especially a resurrection).  Christian apologists and theologians have failed on this point.  Theologians have made some attempts in this area, but because they are basically preaching to the choir, their efforts are sad and pathetic, when examined carefully and critically.
This is why I believe that Drange’s short article ‘Why Resurrect Jesus?’ is so important.  Drange takes a close and critical look at the attempt of one theologian to explain why the resurrection of Jesus is “the most important fact in the history of the world.” (TET, p.55).  Drange argues that the theologian fails to show the resurrection to be an important event, in relation to Christian theology.  I don’t necessarily agree with Drange’s conclusions, but he is doing the sort of critical examination of Christian theology that skeptics need to carry out in order to fully break the first leg of the case for the resurrection of Jesus.
The ‘importance’ or ‘role’ of the resurrection of Jesus is the focus of Drange’s article, but this touches on a key question concerning the resurrection:  What purposes or motivations does God have for performing miracles (especially resurrecting someone)?  The attempts by Christian theologians and apologists to show the importance of the resurrection have implications for the question about God’s motivations and purposes.
Drange does not appear to fully realize the implications of his own critical analysis of the arguments about the ‘importance’ of the resurrection of Jesus, but he does hint at the idea of divine purposes/motivations in a number of places.  The title of his article is one such hint: “Why Resurrect Jesus?”  The title is in the form of a question that one might well pose to God if one was given the opportunity to interview God.
In criticizing the idea that the resurrection is important because of “what it showed to mankind” (TET, p.65), Drange speaks directly about God’s purposes:
Similarly, with the second claim, that the Resurrection showed something to mankind about Jesus of Nazareth, that one, too, is refuted by the fact that billions of people have had no awareness of the event.  …One would think that an omnipotent deity would have done a better job of advertising (or “marketing”) the Resurrection to mankind…if indeed that had been his aim.  At the very least, the resurrected Jesus would not have appeared only to his followers, but also to thousands of other people, thereby making what happened into a genuine historical occurrence.  But that did not happen.  Thus, it seems not to have been God’s aim to have the Resurrection show something to mankind…(TET, p.66, emphasis added)
Drange criticizes the view that the resurrection of Jesus is of central importance to Christian theology, and I think Drange is probably wrong on that point.  However, the sort of careful, skeptical criticism that he does on this question points the way for future work by skeptics, including myself, to address the general background evidence relevant to any complete case for the resurrection, in order to fully break that first leg of the case.