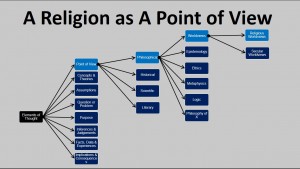 The analysis of thinking into eight “elements of thought” on the left side of the diagram is taken from the Center for Critical Thinking (Richard Paul and Linda Elder):
http://www.criticalthinking.org/pages/the-analysis-amp-assessment-of-thinking/497
The rest of the diagram is my own creation.
As Ninian Smart points out, there are secular worldviews as well as religious worldviews.   A religion is a religious worldview as opposed to a secular worldview.  Marxism and Secular Humanism are examples of secular worldviews.  Christianity, Buddhism, Judaism, and Islam are examples of religions or religious worldviews.
Smart, however, asserts that worldviews (both religious and secular) encompass six dimensions:
The doctrinal or philosophical dimension
The narrative or mythic dimension
The ethical or legal [dimension]
The ritual or practical dimension
The experiential or emotional dimension
The social or organizational dimension
(Worldviews, p.8)
This six-dimensional approach to worldviews appears to be contrary to my cognitivist view of religions and worldviews, since only the first of the six dimensions (doctrinal or philosophical) appears to focus on beliefs or claims.
Of course religions and ideologies involve narratives/myths.  Of course religions and ideologies involve ethics or laws.  Of course religions and ideologies involve rituals or practices.  It seems undeniable that religions and ideologies generally manifest all six of these dimensions; nevertheless, I will argue that the doctrinal or philosophical dimension is more central, more fundamental, than the other dimensions.
Let’s consider the second dimension: the narrative or mythic dimension.  Clearly, religions involve myths and narratives:
Religions set great store by stories–stories of God and gods or of the founder, of the organization, and so on.  (Worldviews, p.9)
But not all stories are religious stories.  Classical fairy tales, for example, are not religious stories.  Goldilocks and the Three Bears, Cinderella, and Little Red Riding Hood are not religious stories.  What is the difference between a religious story and a non-religious story?  The primary difference is that a religious story has religious significance, religious meaning.
But identification of religious significance or religious meaning requires that one be able to distinguish between religious beliefs and non-religious beliefs.  Thus, one must have awareness of the doctrines or philosophy of a religion in order to identify religious stories, and to identify religious stories that relate to a particular religion.
A clear example of a religious story is the story of Moses leading the Israelites out of slavery and out of Egypt, especialy the story of the parting of the Red Sea.  Why is this a religious story?  Why do we associate this story with Judaism and Christianity?
Moses was believed to be a prophet, a messenger of God.   Moses was believed to have been contacted directly by God and directed by God to lead the Israelites out of bondage and out of Egypt (see Exodus chapters 3-14).  Various miracles occur in the story of the Exodus of the Israelites.  A miracle is an event where God intervenes and causes something to happen that is contrary to the laws, or the normal operation, of nature to accomplish some divine purpose.
As Moses led the Israelites out of Egypt, he initiated the parting of the Red Sea.  God made the water of the Red Sea separate so that a wide dry path appeared allowing the Israelites to walk on dry land across the Red Sea.  Then as the Egyptian army attempted to chase down the Israelites, God released the water of the Red Sea on the advancing Egyptian soldiers, drowning them, and saving the Israelites from being killed or forcibly retured to slavery in Egypt.
Why is this a religious story?  Why is this story asscociated with Judaism and Christianity?  This story has religious significance, religious meaning.  We can identify the religious significance of this story because we know some of the religious beliefs or doctrines that this story involves and promotes: